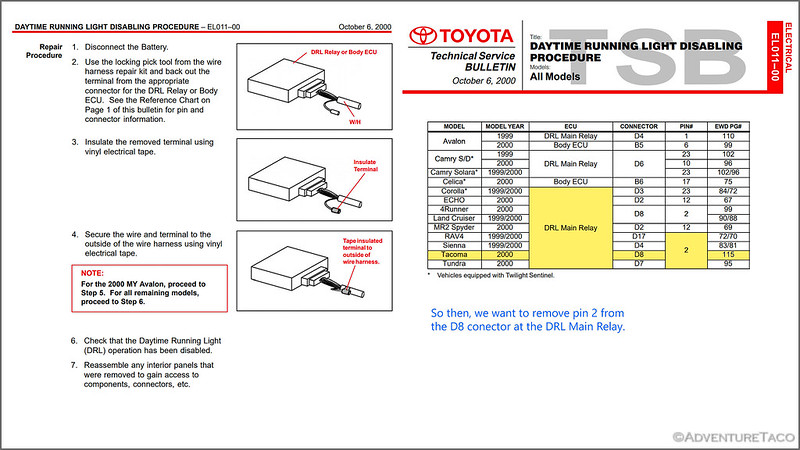 . OK, that, among other reasons.

Anyway, I thought the DRL disable mod had been working just fine for the last 18 years - that is, until I went and made my Hella 700FF offroad lights turn on-and-off with my hi-beams. That mostly worked, except that - for some reason I didn't understand at the time - when the Hellas were set to turn on with the hi-beams, they would also turn on when only the parking lights were - or had been - on.

I ignored this for the most part, since I don't generally run just my parking lights, and it was easy enough to switch off the Hellas entirely with the three-way switch. But, being that I'm a little bit of a stickler for detail, it did always bother me a little bit.

Noah @nzbrock was the one with the brilliant idea as to what was going on:

Daytime running lights work by sending half the power (around 6v) to the high beam. When you are turning your running lights on, I'm guessing you are getting some sort of voltage change on the DRLs and it activates the aux lights.nzbrock

Of course, I knew what he said was true - that is how DRLs work. But, I also knew (thought) that I'd disabled the DRL circuit by switching it just before the DRL resistor as shown in the original wiring diagram I'd included. In fact, when I'd removed the DRL switch to make space in the dash for the Hella switch, I'd left the DRL circuit permanently open. 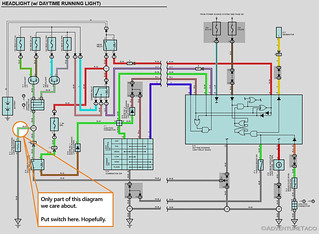 But, the more I looked at the wiring diagram, the more the suggestion nagged at me. While the DRL resistor had been removed from the equation, the DRL circuit was a complex beast, and I certainly hadn't removed the DRL relay in its entirety. As such, it was certainly possible that some voltage was present on the hi-beam circuit when the parking lights were on, and that - even if it wasn't enough to trigger the DRL relay - it might be enough to trigger the relay for the Hellas.

A final realization set me over the top. From the factory, the DRLs use the hi-beam filament of the headlight bulb, and turn ON as soon as the engine is started and the emergency brake is released. Then, they are:

And so, I knew I needed to correctly disable the DRLs - or rather the voltage on the entirety of the DRL circuit - in order to solve my issue with the Hellas staying on when I expected them to be off. Luckily, Noah had also remembered seeing a Technical Service Bulletin (TSB) about disabling the DRLs, and sent me a copy - Toyota TSB EL011–00 Daytime Running Light Disabling Procedure. 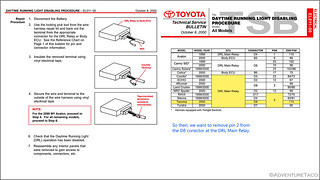 With this information in hand, I set about disabling the DRLs the right way - or at least, the way Toyota recommended.

First, I located the DRL Main Relay by removing the interior panel below the steering wheel. The relay is a gray box just below the e-brake lever, and is secured on a bracket with a single 10mm bolt, which I removed. 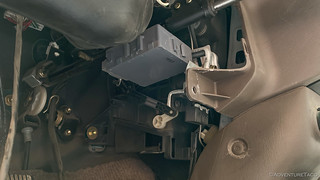 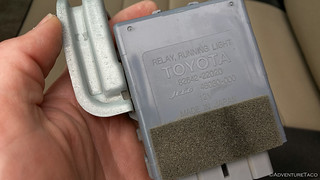 Unplugging the connector from the relay, I located pin 2 - as noted in the Toyota TSB. Referencing the Toyota Factory Service Manual Wiring Diagram for the Headlight with DRL circuit (the original wiring diagram shown above) was helpful in this identification, as it showed that pin 2 was a B-O wire (black-orange), and there was only a single B-O wire in the connector - off all by its lonesome self on one side of the connector.

And, it was in a location that - while not labeled - could be pin 2! 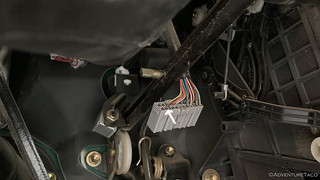 With the wire identified, I followed the steps of the TSB - removing the pin from the connector and taping it to the wiring harness in case it ever needed reconnecting later.

I then tested the operation of the Hellas with all combinations of the headlights and parking lights on, as well as with each of the positions of the Hella switch - and everything worked as I'd originally envisioned. I had, finally, disabled the DRLs - and their residual circuit voltage - entirely!

But, I wasn't quite done. I still wanted to remove the wire I'd added in my very first mod of the Tacoma to turn the DRLs on and off - both because I never use that functionality, and because it's always nice to clean things up and remove wires rather than add new ones! So, I found where I'd spliced in for my switch and removed the additional wire that led into the cab. A bit of solder, and I had the B-W (black-white) wire that I'd originally cut, all soldered back together. 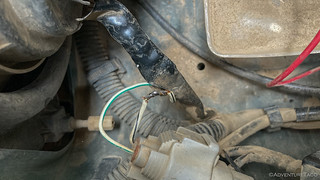 Some electrical tape "wrapped up" (ba-dum-dum) the project, and now I feel confident that things are better than they have been for the last 19 years!