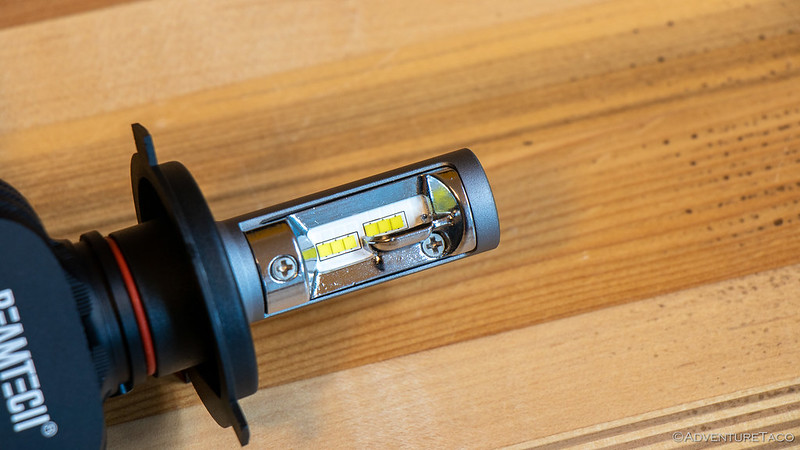 For years now, I've felt like the headlights on my 1st gen Tacoma left a little something to be desired. More than a little something, really. Some of it is my fault - the bulbs I have installed are over 20 years old, surely not as bright as they once were - but it seems to me that 1998-2000 Tacomas have always had the crappiest of the 1st gen headlights.

Initially, I added Hella 500FFs to the front bumper to solve this problem. They were great until they got destroyed when I hit a deer for the first time. I replaced those with Hella 700FF lights, and those proved to be even better - especially since I tied them into the hi-beams. Still, I want more when I'm ticking away miles on a highway - with hours of darkness to navigate on the way to some adventure.

One option has been to purchase something like Baja Designs Squadron Pro, Rigid D-XL Pro, or my personal favorite, Diode Dynamics SS3 Pro LEDs - all would give me more light, but at a cost. A cost I haven't been willing to bear - so far.

In chatting about this with Monte on our Clear, Colorful, Colorado trip, he mentioned something to me that he's been saying for a while, "Just f-ing do the HID upgrade to your Hella's already."

Well OK then, no need to mince words.

The HID upgrade is reasonably straight forward - it entails taking the stock, 55W halogen lights out of the Hella 700FFs, making a slight modification to the plastic housing, and securing some new, 55W HID lights in their place. Of course, you also need to find somewhere to mount the ballasts for the new blubs, but that's easy as well - especially when the cost is right around $150 for the entire setup - less than half the price of an LED option.

While I was at it, I also decided to upgrade my headlights - I'd replace them with LEDs - so that all the light pouring out the front of my truck would be bright. Finally, I'd be able to see, again!

I gathered parts for both mods at the same time. Or is this maintenance, since I really needed new headlights anyway? It doesn't matter - here's what I picked up:

Installation of the Headlights

As I mentioned, low beam cut-off was an important factor for me when buying these LEDs. So, before installing , I verified that there was in fact a cut-off shield. 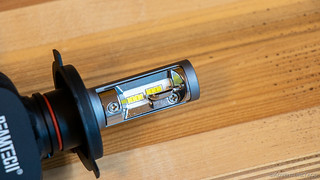 Headlight installation was mostly straight forward. Simply unplug the harness from the rear of the OEM headlight, remove the rubber cover, remove the wire retainer and pull the original bulb out of the headlight housing. Note: I found it easiest to remove the air intake box and battery during this operation, for easier access to the headlights. 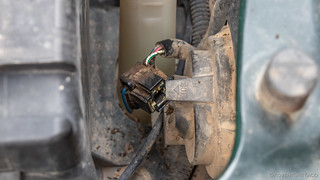 Unplug the harness after removing the air intake box (passenger) or battery (driver). 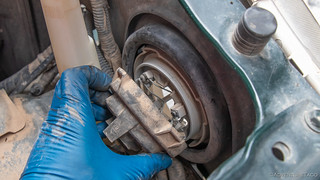 The rubber water cover is a friction fit. Pull backwards to remove. 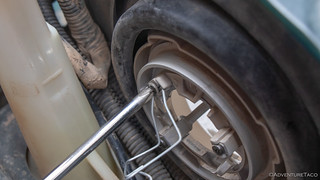 Completely remove the wire harness; it will be easier to install the LED this way.

To fit the new LED lights into the housing, a few tricks and modifications are needed. First, place the wire retainer over the bulb prior to inserting it into the housing - it's easier to manipulate the retainer outside the truck. Second, you'll need to modify the rubber cover to fit over the LED heat sink. I found that cutting out the two breather holes and making a slice in the bottom of the cover was all I needed, and I still got a good fit. Then, put everything back together, finally plugging the stock harness into the mating fitting on the BEAMTECH LEDs. 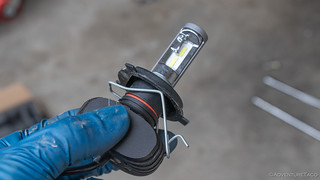 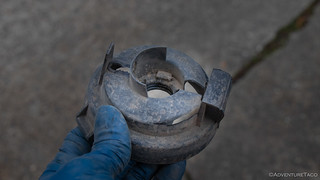 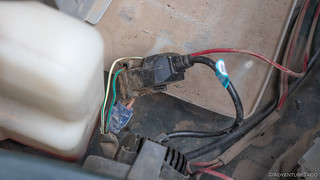 Plug in the two harnesses and secure with a zip-tie.

Installation of the HIDs

Replacing the lights in the Hellas is a bit more entailed than the headlights, but still not at all difficult. As far as tools go, I only needed the following:

The whole process starts by removing the Hellas from wherever they are currently installed - in my case, the front bumper. 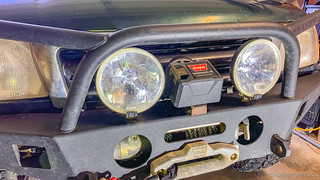 Next, locate the plastic clip that holds the glass lens into the plastic housing and remove the #2 Philips screw that holds it in place, so you can separate the two pieces. 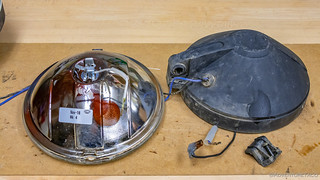 Locate the clip on the back of the lens that secures the blub. Unclip it, and then remove it from the "hinge" side by carefully pulling it off of the two "ears" that form the hinge. 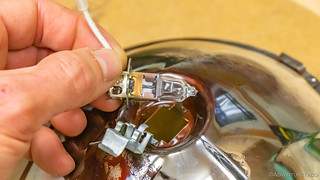 Place the H3 bulb into the lens housing, aligning the cut-outs on the bulb with the two metal prongs on the housing as shown. 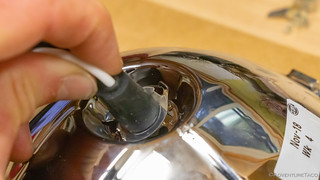 Using the hot glue gun, fill in around the bulb as you hold it securely in place against the rear of the lens housing. This secures the bulb to the housing and also seals it against weather. 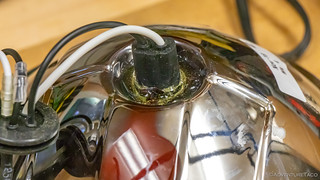 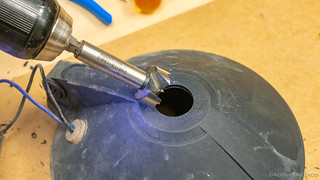 Fish the wires and grommet through the 1" hole and secure the grommet in place, helping to keep the entire assembly weather resistant. 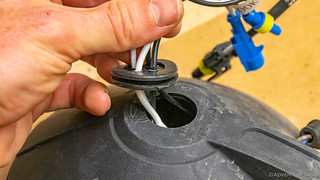 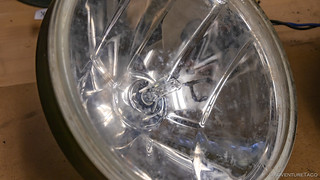 At this point, I was done, except for (re)installing everything on the truck! That process was straight forward, as I've done it a few times in the past, and before long everything was buttoned up and ready to test.

With no reference and with photography of night lights notoriously hard to capture, it's hard to get scientific measurements, but the light output of the Tacoma is now significantly better than it was prior to these upgrades. I look forward to my next trip, to see whether I feel like it makes a significant difference at 62mph! 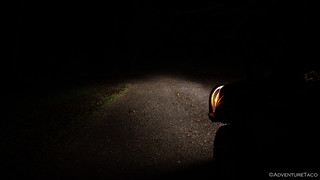 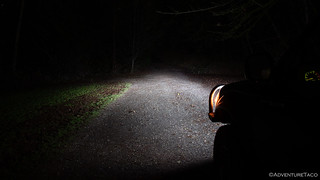 LED low beams. Better, for sure. 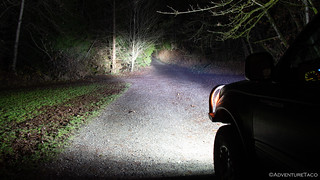 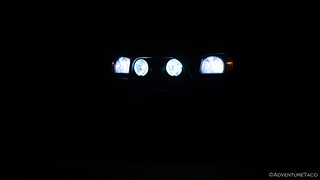 A little bluer than I'm used to. A problem? We'll see.

2020-12 Update: The light from the LED headlights was definitely bluer than I was used to, but that turned out to be OK. In fact, the LEDs performed well, even in adverse weather conditions. However, after two trips, I noticed they emitted a ton of RFI (radio frequency interference), which ultimately left me looking for something else (see my much more complete review of the LEDs here). As such, I've now removed the LEDs and returned to Halogens - though with more power than stock, and much better performance. For the full story, see Out with the LEDs, Back to Halogen Headlights.

I'm currently trying to figure out my next steps.

2022-03 Update: I found the culprit and it wasn't the Hella's at all. It turns out that my the Bussmann relay box that I installed had begun to melt in various places, causing the connections to fail. I show photos and the fix in my Rig Review - What worked and what didn't Winter 2022?