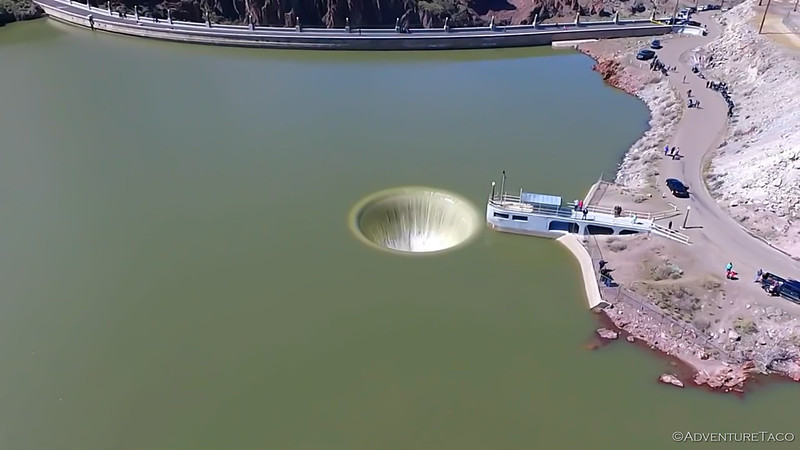 We'd just been to the Owyhee area, but when the opportunity presented itself to get together with Mike @Digiratus, Zane @Speedytech7, Ben @m3bassman and Kirsten for Memorial Day, we knew we had to go back - the lure of getting together to enjoy the outdoors with friends, greater than the desire to explore somewhere new.

Plus, even though we were in the same general area, we were able to come up with an itinerary that wouldn't exactly repeat what we'd done just a few weeks before. That is, if all went according to plan.

Like all trips, this one wouldn't go exactly as planned, but as usual I'm skipping too far ahead.

It was Wednesday evening around 6:00pm when we arrived at Snively Hot Springs - a place we'd visted a over year earlier, but one that we figured would be a nice way to ease in to the trip. Unfortunately, eight or so other folks had the same idea about taking a soak on this drizzly evening - and in these days of social distancing we decided that hanging out in close proximity to eight complete strangers was probably not the best of ideas - so we continued upriver on without stopping. 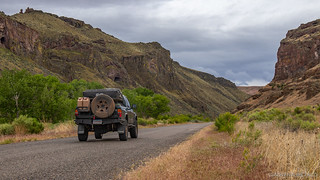 Our next destination wasn't far at this point - the Lake Owyhee Dam, and it's overflow siphon. On our last trip to the area, we'd wondered about the huge pipeline that snakes across the landscape here, and I'd done a bit of research on the Internet upon our return home. It was then that I discovered something I've always wanted to see, and something that's been a recurring nightmare for @mrs.turbodb - a hole in a lake that everything just disappears into! 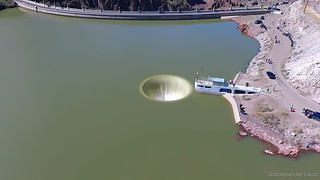 Alas, even though it was still early in the season, there clearly wasn't enough water this year to completely fill the lake, the entrance to the overflow a good five feet above the water line. Someday we'll have to come back when it's in operation - because I want to see, and hear, everything disappearing into the abyss! 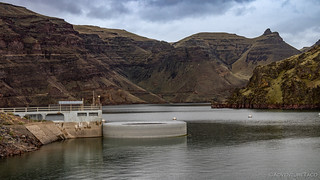 Even with the overflow out of operation, a short break in the rain allowed us to get out and explore the dam a bit. It's a tall one at 844 feet, and afforded quite the view as we looked down-river. 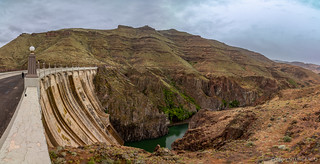 Soon the rain picked up again and we headed back to the Tacoma. wondering if, after our first two strikes - at Snively hot springs and the Owyhee overflow, whether our third (and final) attempt of the day would be successful: we were going to try to climb up out of the canyon and over the Owyhee Plateau to meet our fellow adventurers along Succor Creek Road.

And we were going to try to do it in the rain, with just over three inches of rain having fallen in the previous 48 hours. Surely, we were just asking for a muddy mess. Ben even warned us that he'd nearly gotten stuck on this same road around the same time the previous year, and assured us that if we weren't in camp by 10:30pm, he'd round up the locals for a rescue attempt.

First though, we enjoyed a very pleasant drive along the eastern edge of Lake Owyhee - this really is a beautiful landscape, and a constant reminder that even places that have been visited before are often worth coming back to again and again. 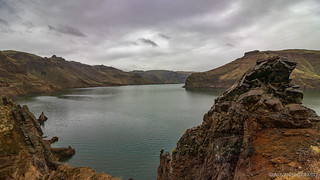 Unexpectedly - for me at least - the entire road next to the lake was paved. But, as we turned east on Fisherman Road, the dirt (mud) started and we aired down with our snazzy tire deflators before heading up with our fingers crossed. 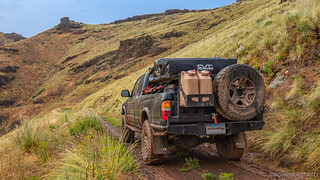 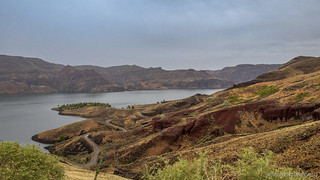 Looking back on it now, it should have been obvious to us that this was only going to end one way - with us striking out. Frankly, I think we knew it at the time, but like any good baseball player, we pushed on, hard headed and hoping to avoid the inevitable 80-mile detour we'd be forced to take if we couldn't make it. At any rate, we made it up to the plateau with no problem at all, but there the going got disgusting.

Slipping and sliding on the muddy surface, we'd likely have pushed on if there was a second truck - a mere 7 miles separating us from our destination. Solo however, 7 miles seemed an unfathomable distance and with the trip barely underway, we knew the smart money was on turning around and tackling this route another day. A sunset over Lake Owyhee as we headed back was little consolation. 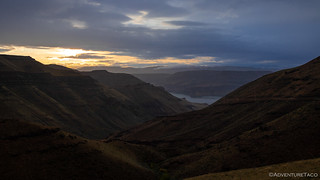 It was 10:00pm and dark when we pulled into camp. Rather, we pulled to the side of the road next to Ben and Kirsten who informed us that the location we'd planned to camp was such a muddy mess that they too were slipping and sliding all over the road.

An hour later, Mike and Zane showed up - happy to have arrived after a long day of travel. Greetings were warm, quick, and socially distanced, and before long we all climbed into our tents - hoping that the roads would miraculously dry up before we set out the next morning!

Right. Well, at least it wasn't raining any more... for now. 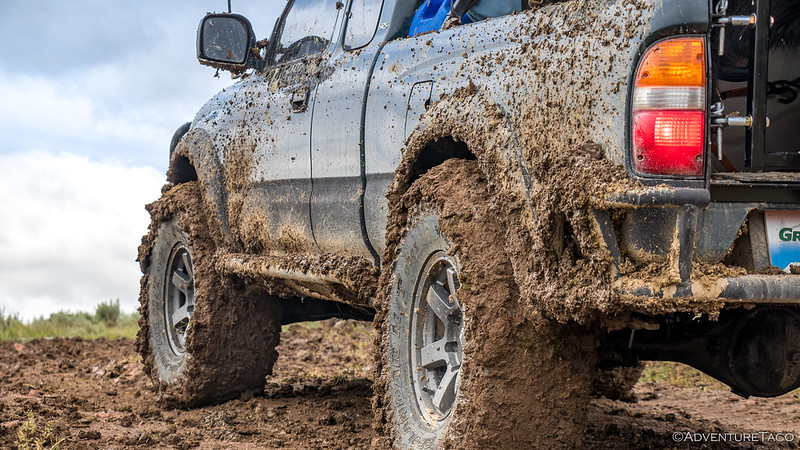 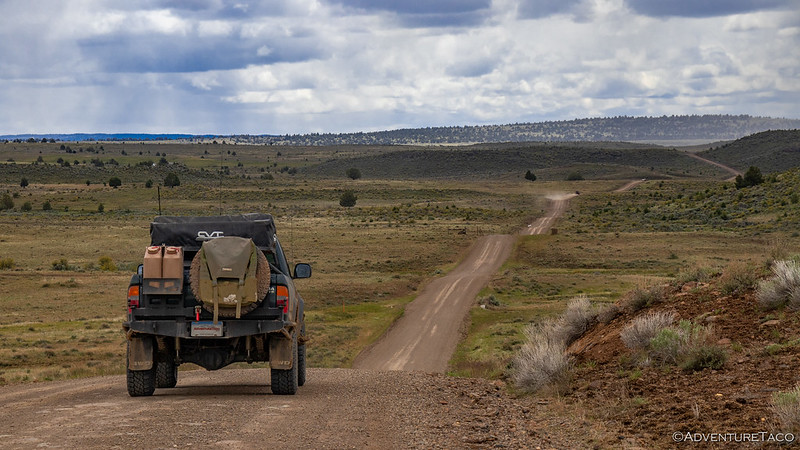 You Can't Drive Through the Delamar Mine - Owyhee Redux #3 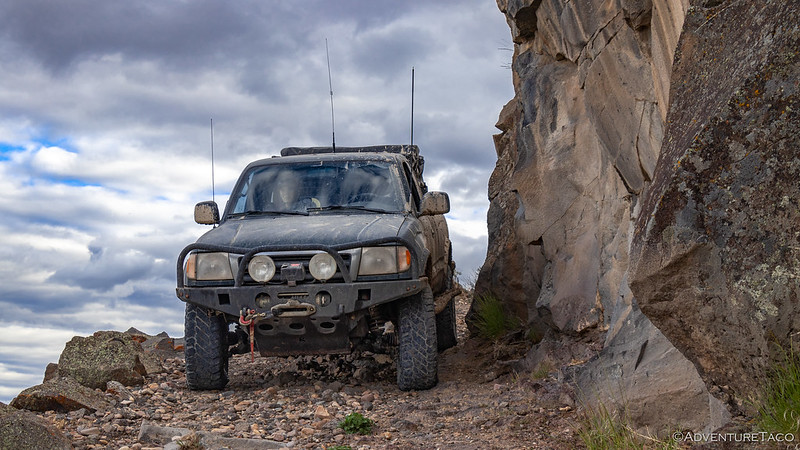 Love Owyhee? Check out
more Owyhee trips
for all the amazing places I've been in and around this special place over the years.