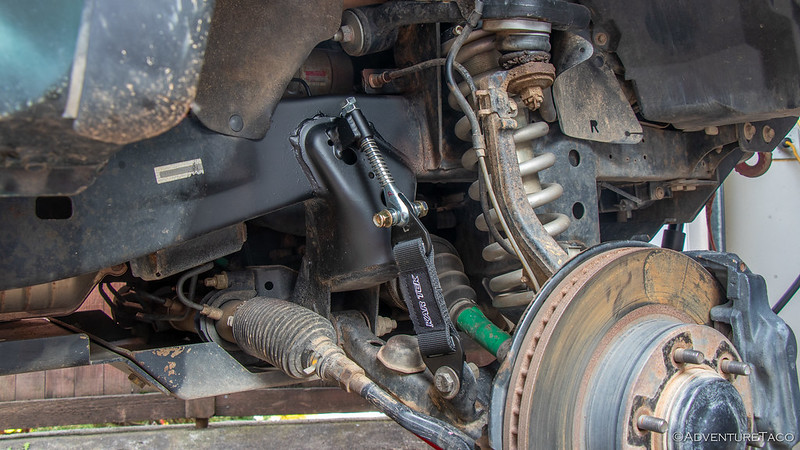 I've done a lot of work to the suspension on the Tacoma - with good reason since it is what helps to make our trips more comfortable, and what helps to isolate most of the truck from the harsh terrain over which we travel.

In doing that work, one of the things I knew that I needed - at least technically - was a good set of limit straps. But - as with many who focus on the bling of a new shock, and less on completely finishing the job - I never installed any. Not on the back, and not on the front.

And then, a rude awakening. As we were making our way up Mt. Antero - a 14,000 foot peak in Colorado - Mike's @Digiratus shock tower exploded. 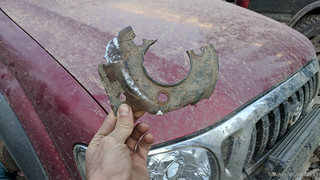 We don't know exactly why this happened, but after much discussion, I think several of us generally agree that one of the contributing factors was over-extension of his front shocks. When this would happen - essentially the lower control arm (LCA) wanting to extend further than the shock would allow - the downward force from the LCA would transfer through the shock and to its only other attachment point - the top of the shock tower. 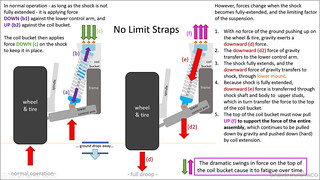 Compensating for this sudden, downward force, is not what the shock tower was designed for. Over time, it caused fatigue and eventually failure. Or, at the very least, contributed to it.

Limit straps could have helped to prevent the situation, and since I can hear my shocks reaching full extension on the trail from time to time, it's time for me to get some limit straps installed!

What do limit straps do?

Let's look at the previous diagram again, this time with with limit straps installed. 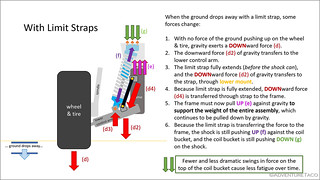 A quick way to know if you need straps

So, how do you know if you need limit straps? Here's a dead giveaway:

If, at this point, the LCA drops down below the lower eye of the shock, that means the shock is limiting the travel of your front suspension. You need limit straps.

Even if the LCA doesn't drop down below the lower eye, if you can push it down below the lower eye without a ton of effort, that shock is still limiting your travel - and you would benefit from straps. This is because the additional weight of the wheel+tire, and momentum when the suspension is cycling, will result in more downward movement than when the suspension is just sitting on stands.

Ultimately, my recommendation if you are doing a lot of driving where your suspension is fully extending, limit straps are a good idea.

Strap installation is reasonably straight forward. The first step is to figure out the length of straps that will fit and then purchasing them. For a 1st gen Tacoma with OEM LCAs and the sway bar removed, 7" straps are about right. I ordered up a set of 7" Kartek straps, two clevis' to secure the top of the strap, and two clevis mounts, which arrived a few days later. I also picked up a couple of Grade 10, 9/16" bolts and nylock nuts to secure the bottom of the strap. 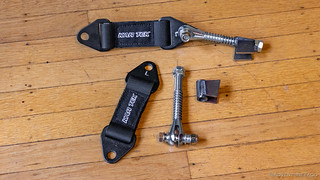 With this configuration, the clevis mount is welded to the frame of the truck, and the bottom of the limit strap is secured to the LCA using the sway bar mounting point. I got started by taking off the front wheels. 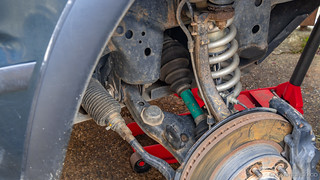 With the wheel removed, the next step was to lay out where the clevis mount would attach to the frame. This is done by 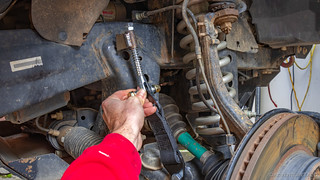 Having noted the location, I used an angle grinder and flap disc to remove any paint and rust from the frame in order to prep for welding. 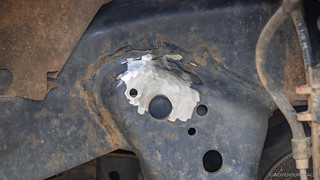 Everything prepped, I welded the clevis mount to the frame, and hit the entire area with a couple coats of primer and paint. 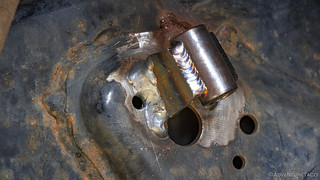 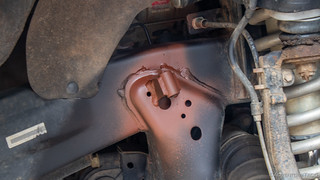 All that was left after the paint dried was to reinstall the clevis in the mount and adjust it so that the strap reached full stretch when the brake rotor was about ¼" above full extension. This is something I may adjust over time, but I figured that a ¼" buffer was a good starting point for limit strap stretching and to compensate for additional stretch due to weight and momentum of the tire on the trail. 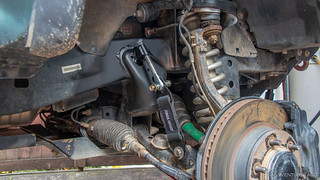 And that's it. Insurance installed! Reinstallation of the wheel and everything is good to go.

I've got an upcoming trip to Death Valley where I plan to put it all to the test...