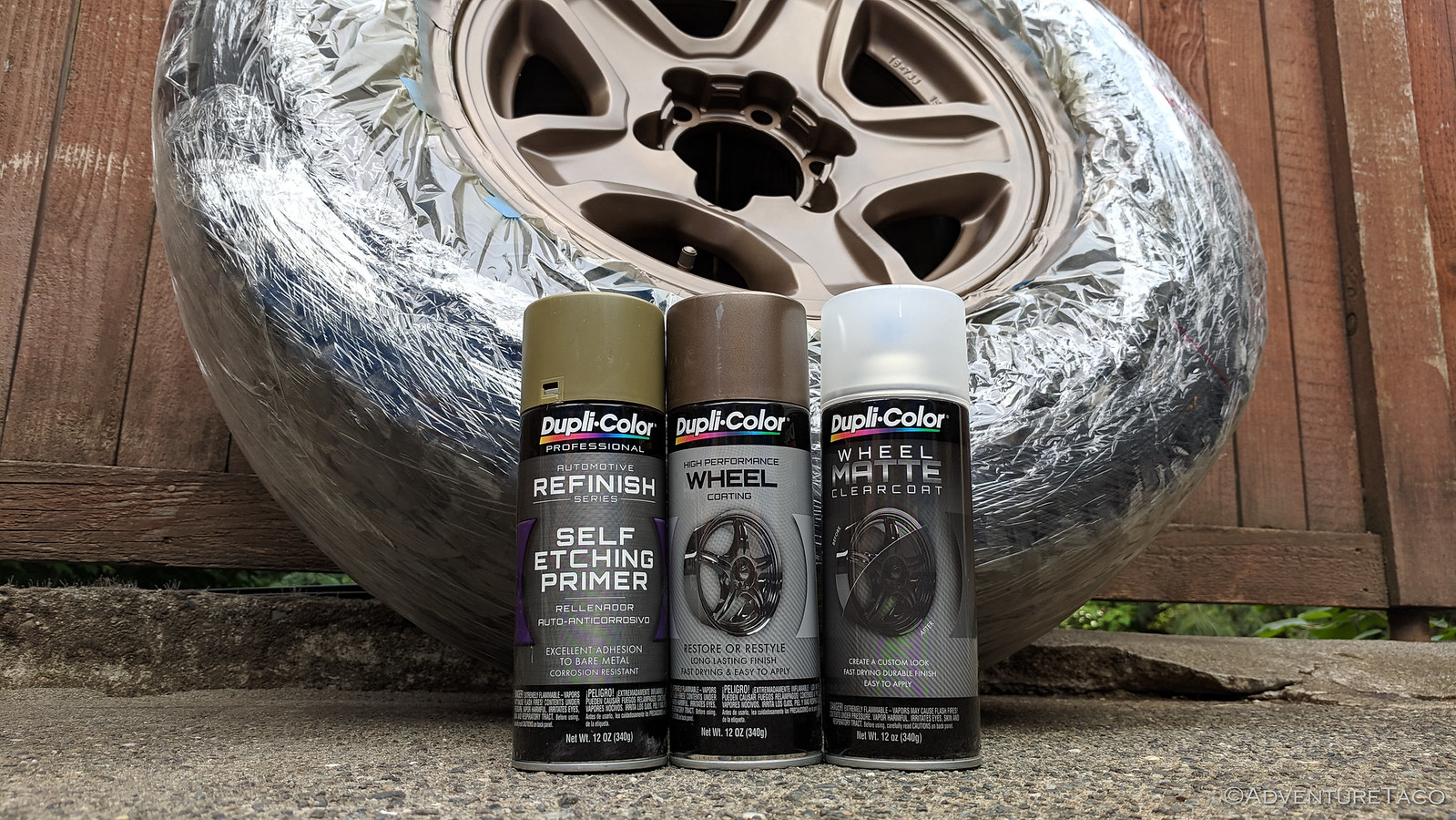 It's no secret that over the last few years, I've been through quite a few sets of wheels. I started with my stock 15" aluminum alloys, which "had to go" as part of the most expensive brake upgrade ever and resulted in the Tacoma wearing a set of steel wheels for a couple of months. I knew these were temporary - and the long-term solution was yet to come. 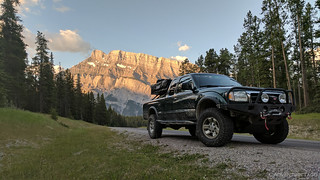 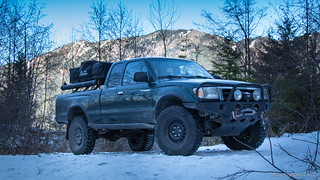 I knew when I bought them that the SCS Steath6s were the last wheel I'd ever purchase for the Tacoma. I mean, what more could I ask for - they looked great on the truck, fit the bigger brakes, and even rolled along the ground from time to time! 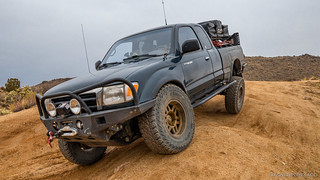 Alas, proving me wrong about being my last set of wheels, they were great in all ways but one - with only 3.5" backspace, they stuck out from under the fender flares and got mud all over everything. Always favoring form over function, I knew the Stealth6s had to go - no matter how much I liked the look, dealing with all that mud was a non-starter for me, not to mention @mrs.turbodb (who luckily never had to experience it).

And so, when I found and installed the 4Runner wheels, I knew - some would say "again" - that they were the last wheels I'd ever purchase for the Tacoma. 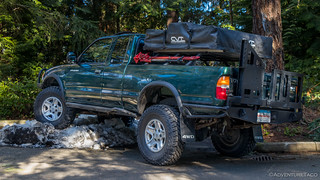 But one thing about them bugged me - the color. The 4Runner wheels are, of course, silver. Like all Toyota wheels of the late 1990's, these aluminum alloy's would look great on the truck in it's stock configuration. In fact, with the same wheels on the 4Runner, I know that to be the case. But once you remove all the chrome - bumpers - from the truck, having silver wheels just looks...meh.

So, I knew something had to change. And that something was the color of the wheels - because I don't want to be wrong twice about these being my last set.

I got started - as one does - by procrastinating. I wasn't looking forward to figuring out how to change the wheel color because I knew that the wheels were very dirty. It seems that these stock wheels have a tendency to corrode - especially on the inside - and I had no idea how to clean that up. I knew I could take the easy way out and send the wheels to get powder coated - but the cost of that operation would likely be as (or more) expensive than just buying some new SCS F5s.

So I procrastinated some more by removing the 4Runner wheels - which I dubbed "procrastination progress" - and temporarily reinstalling the Stealth6s. 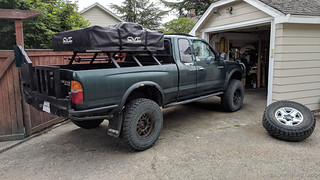 Boy, do those look snazy.

I then proceeded to watch a dozen or so YouTube videos on refinishing wheels, and one thing became abundantly clear: pretty much everyone who does this uses the same paint: Dupli-Color Wheel Paint. I don't know if it's the best, or if they just have good name recognition and marketing, but the Internet had convinced me - this was the direction I was headed.

I gathered everything that the Internet had told me I would need:

You'll note that I didn't list skill or luck - the Internet had promised that I needed neither of these things; apparently painting wheels is easy. I was ready to get going!

Oh, and I should mention - I chose a time to do this when I knew I wouldn't need the wheels for a 2-week period. I figured I'd give myself a week to prep and paint, and a week for the paint to fully cure (though, apparently you can re-install them after 5 hours).

The first step of course was cleaning the wheels. This was in fact - as I noted above - the part of the project I was least looking forward to, and least confident in my ability. But, being the good Interneter that I am, I got out the Adam's Wheel Cleaner, brush, and a hose and set to work. 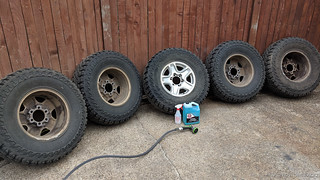 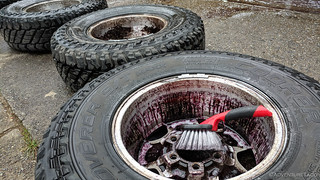 The cleaner definitely did something, but just as I'd worried, it was no match for 20 years of grit and grime on these wheels. It would turn a dark red/purple - a sure sign it was eating up all the bad bits - but then when I rinsed it off, all the bad bits seemed just as bad as they'd been a few minutes earlier. Three applications and I knew this wasn't going to be my solution to cleaning. 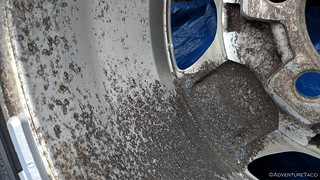 Hoping - but knowing it wasn't going to work - I gave the pressure washer a try. And by try, I mean I used the "don't ever use this because you'll destroy whatever you point it at" tip to see if it could blast away the build up. Not a chance. I knew there was only one solution. It was the solution that would have come with powder coating - sand blasting.

Luckily, I had a sandblaster already, having used it when I reinforced the rear frame last year. So out it came, along with my 6-gallon pancake compressor - and I got to work. 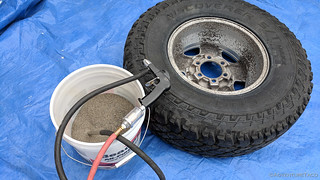 Hmm, it seemed to be working, but at the pace my compressor was going - blast for 20 seconds and then wait a minute to recover pressure - I was going to need the entire two weeks just to sand blast these five wheels. Something had to be done.

My initial thought was that I could rent a compressor for a day. With enough juice (~7 cfm @ 90 psi) I knew I could do each wheel in under an hour - but the thought of renting a tool always makes me cringe. I've found that it usually only takes 3-5 rentals to actually pay the cost of purchasing the tool, and so I set off to Craigslist to see what I could find. 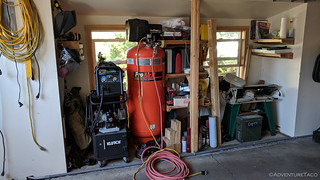 The next morning I loaded it up, brought it home, and promptly spent all day cleaning it up - it's previous owner clearly neglecting it a bit, with a couple gallons of sludge stored in the bottom of the tank.

And that meant that by the day after that, I was ready to start sand blasting! The result was spectacular and I knew that everything - with the exception of my finger getting out of the way of the shutter - was going to be OK in the world. 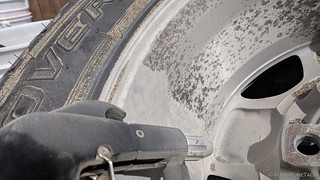 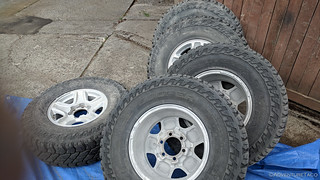 The insides of the wheels cleaned, I counted myself lucky as I was putting everything away for the evening. It was just starting to rain, and that would have put an end to any sand blasting anyway, given that I was doing it outside on a big blue tarp!

The next day, I pulled the wheels out and got to work on the faces of the wheels with a garden hose and some 600-grit wet-dry sandpaper. At the time, I wasn't sure that the sandpaper was actually doing anything - 600-grit is high enough that it was hard to see if anything was coming off - but I trusted that it was and scrubbed away on every surface to provide a bit of tooth for the new paint to grab onto. 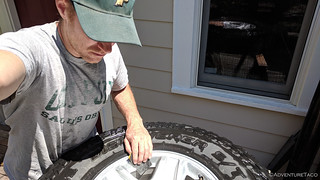 A good rinse and a sunny, warm afternoon meant that by evening, I could move on to the next step - masking off the tires from any over-spray. I'd considered multiple methods of doing this, but ultimately decided that my best bet would be wrapping the entire tire in plastic wrap. This would allow me to still move the wheel around without having newspaper or a garbage bag flapping around the wet paint - and I knew that moving wheels would be necessary if I were to try to paint both sides of them all at the same time. Plus, I had some industrial plastic wrap that I use for shipping bed racks, that I knew I could stretch over the tires. 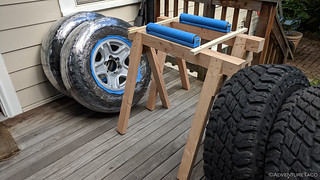 Some blue tape and another couple hours and I was one step closer to actually painting these darn things. I'll tell you what - it's a good thing with a project like this that my time is worthless!

The next step was using the Dupli-Color Grease & Wax Remover to give a quick once-over of all the surfaces. I used some nitrile gloves as I did this, which promptly disintegrated in the solution (as they also do with brake cleaner). Gotta be good for the skin, ehh?

But hey, it meant that I was finally ready to paint!

Now, the Dupli-Color paints are very specific in their dry and re-coat times. Essentially, it goes like this:

If any of the steps takes longer than 1 hour, you are supposed to wait 24 hours before resuming. And don't forget to shake the can for 10 seconds, every minute, as you're painting. No pressure.

I got started with the Dupli-Color Professional Self-Etching Primer. This goes on as what I'd call army green, and does definitely take a few coats to get an opaque look. That's good, as it means that each coat is getting plenty of bite into the substrate. 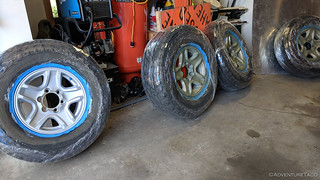 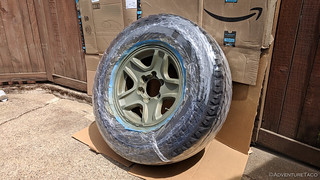 I was able to move quickly enough that I got all 5 wheels primed at the same time - with ~12 minutes between each coat - rolling each one in- and out-of the garage in order to spray, the day's breeze held at bay by a huge tarp I'd erected outside. And then I set a timer for 30 minutes.

For the Bronze coats, I decided I'd better do the tires in two sets, rather than try and rush through as I had with the primer. That would allow me to spend a bit of time to ensure full coverage without worrying that I was going to exceed the 1-hour limit to apply all coats. So I started in on the first three wheels, slowly watching them turn into beautiful masterpieces right before my eyes. 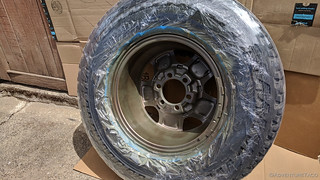 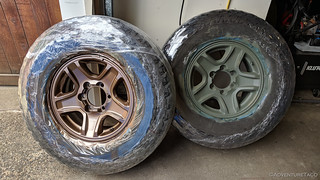 The remaining two wheels followed, as did the clear coats in a similar fashion after a one-hour break for a very late lunch. I'd started with the cleaner at 11:00am, and it was now 5:00pm in the evening. And time to let the wheels dry for at least 3-4 hours before moving on to the next step.

It was a couple days later when I got around to pulling off the tape and plastic from the wheels. It came off easily and with no uplift of the finish - and boy, the wheels looked amazing! Like a factory finish really. I mean, except for all the dings that were in the wheels prior to starting! 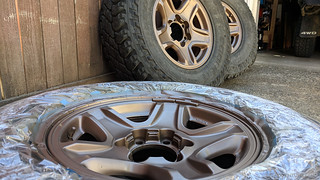 Even though Dupli-Color suggests that you can reinstall the wheels after 4 hours, the can also states that full cure is 5 days, and having been in no rush to this point, I decided to wait a week before installation. I figured that was a good time to get my center caps prepped, painted, and cured as well.

The process was much the same as the wheels, with two exceptions - first, I learned my lesson and skipped the Adam's Wheel Cleaner and went straight to sand blasting. Second,I figured that if the Dupli-Color Grease and Wax Remover melted my nitrile gloves, it might do the same to the plastic center caps, so I hoped that a bit of denatured alcohol would suffice in its place. 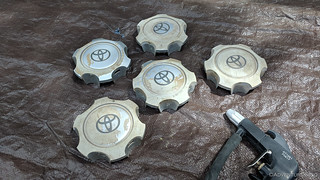 Then, it was on to priming, spray painting (bronze), brush painting (black Toyota logos), and applying a clear coat. 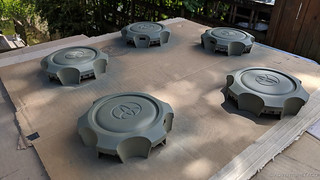 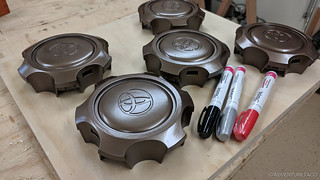 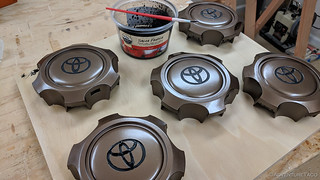 Not as nice as the wheels in my opinion - largely due to the fact that I'm apparently getting older and don't have the same steady hand that I used to have when painting small model cars - but definitely better than they were, and nothing that anyone but me will notice, especially when the wheels are covered in the spoils of adventure.

To say I am extremely pleased would be an understatement. I did not expect a backyard spray job to come out this well, but I suppose putting into practice the saying that prep is 95% of a good paint job does in fact lead to good results! 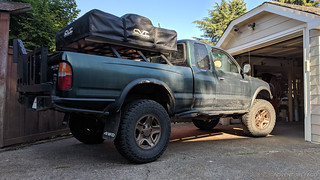