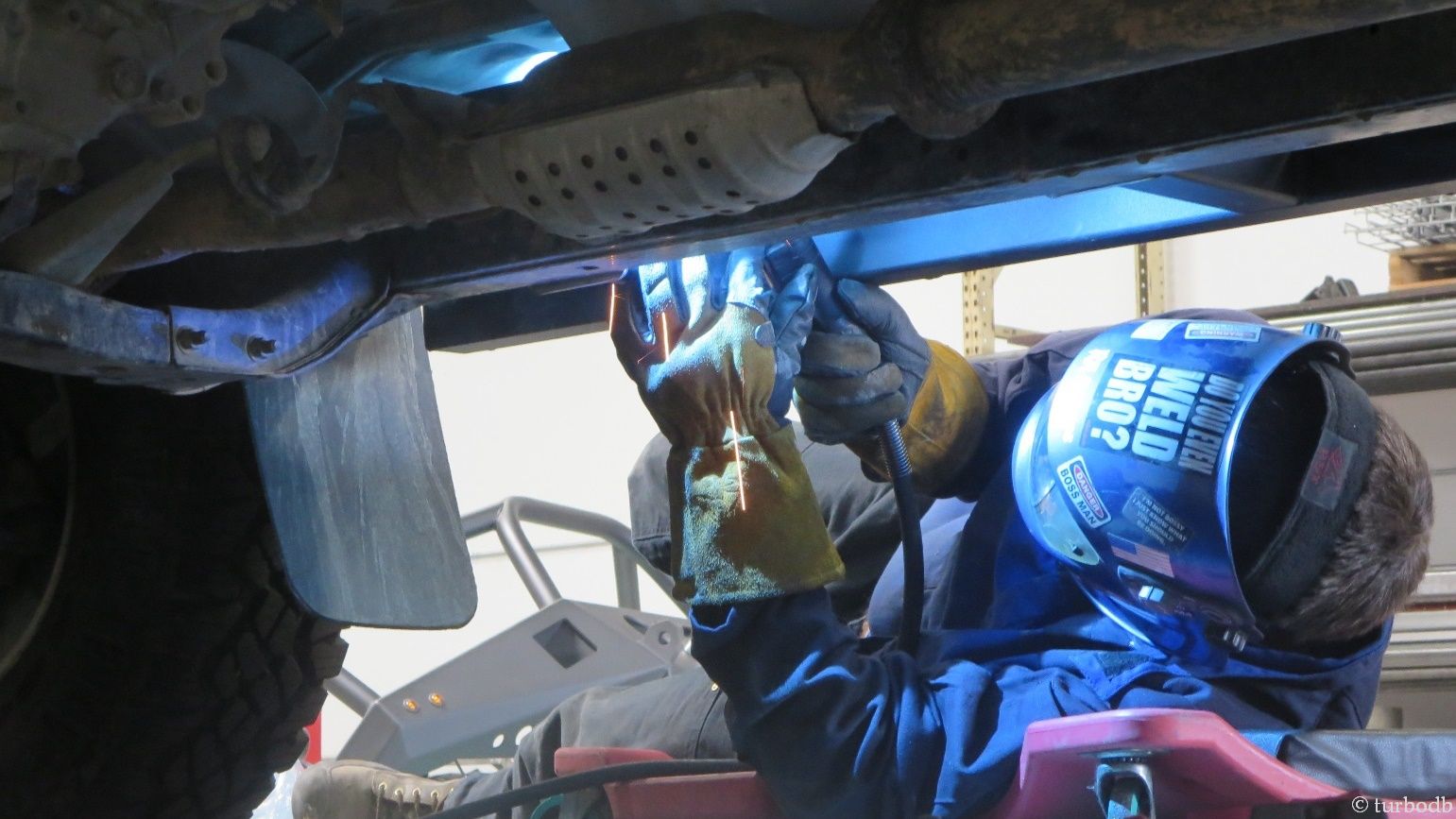 Relentless Armor - An excursion from Seattle WA to Sparks NV

Six months ago (Feb 2016), I'd decided it was finally time to get a winch on my Tacoma - to allow me to get out of jams (if I get in one); to increase safety on certain trails when we're out solo, and to open up new trails where a blow-down may need to be moved out of the way (for instance).

Initially I was going to go with a hidden front hitch, and a winch that I could move to the front or back of the truck, but I soon found that there aren't really any hidden front hitches for 1st Gen Tacoma's, so I looked at a few different plate bumper options. Once I saw the Predator from @RelentlessFab on @cmj's build, I knew that was the bumper I wanted. 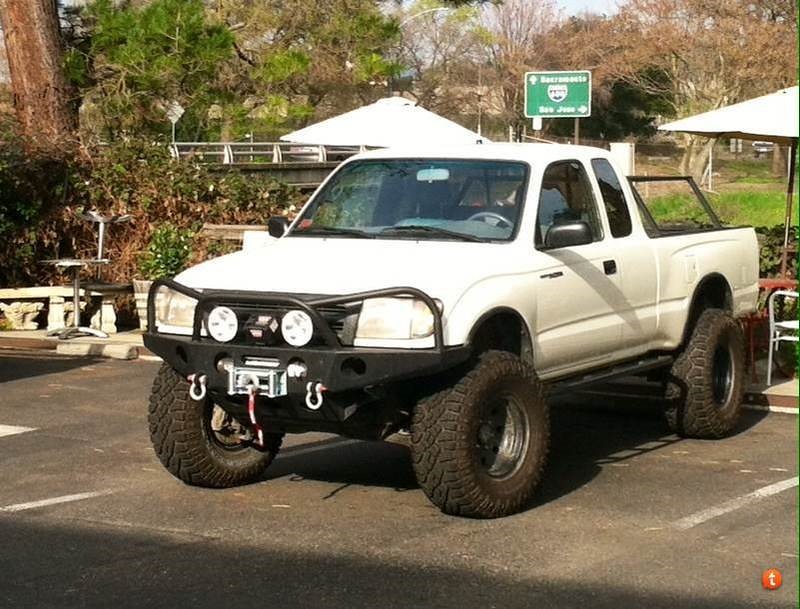 So, I sent a few emails to the good folks at Relentless (which really means Brittony, since she handles that side of things) and a whole bunch of questions later - I really felt like I was bugging her with tons of questions - measurements, etc. - I knew I was going to get what I wanted, and we'd arranged an install date - August 23rd.

Now I had six months (and a whole summer's worth of camping) to wait.

As we all know, when you have six months anticipating your new armor, and you read TW on a relatively regular basis, there's a lot more you end up wanting. Knowing that a trip to Sparks (from Seattle) wasn't going to be a regular occurrence for me, I decided in May that I should also get some sliders. With only a three-month lead time, it was going to be tight, but Brittony came back with the good news - they could be welded on the same day.

Of course, I was now on the slippery slope and at the beginning of August I just knew that the right thing to do was to replace my stock skids with a full set from Eric and his guys so I added that to my order as well. With the skids though, I'd just be picking them up (bare) and rattle-canning them myself once I got back. No need to get those finished since they'll need regular refreshing anyway. 🙂

Oh, and of course I needed a winch for the bumper, and I got a great deal on a Warn M8000-S before I headed down for install day.

Oh, and I needed some new suspension for all that weight. (That's another story.)

With install day just around the corner we packed up the truck (I was combining this trip with delivery of a display case I'd built and some camping in northern California) and headed out. We'd stop and deliver the display case, do a bit of camping and hiking, and then end up at Relentless Fab on August 23rd. 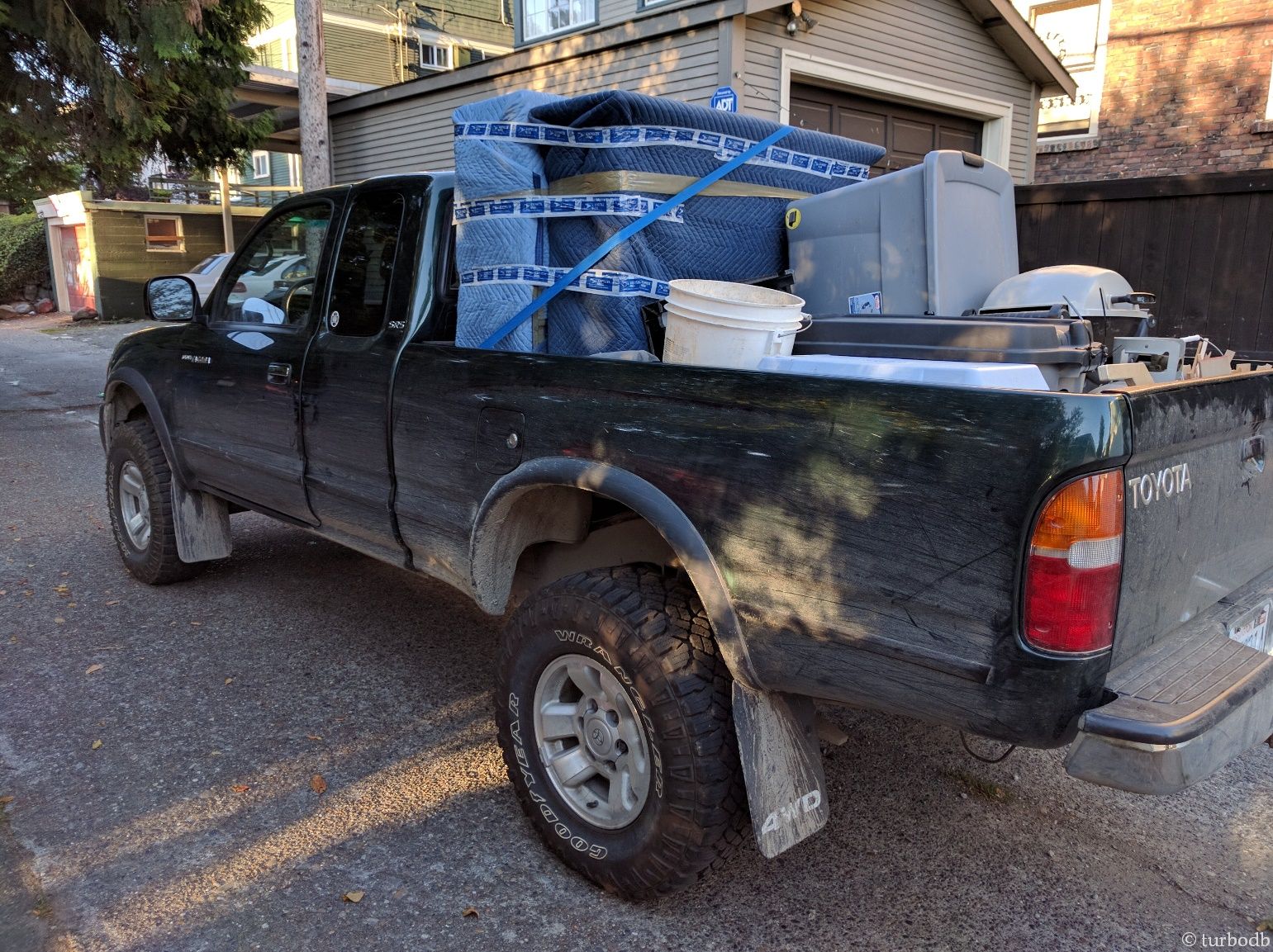 We got to the shop bright and early on the 23rd, just as Brittony was pulling up in her new(er) T4R. She hopped out with the dogs, greeted us (@mrs.turbodb was there too) like we were family and had us pull into the shop where the guys were already there and clearly raring to go. A quick round of intros and in no time flat they had the hood up and were prepping to do both the slider and bumper install at the same time. 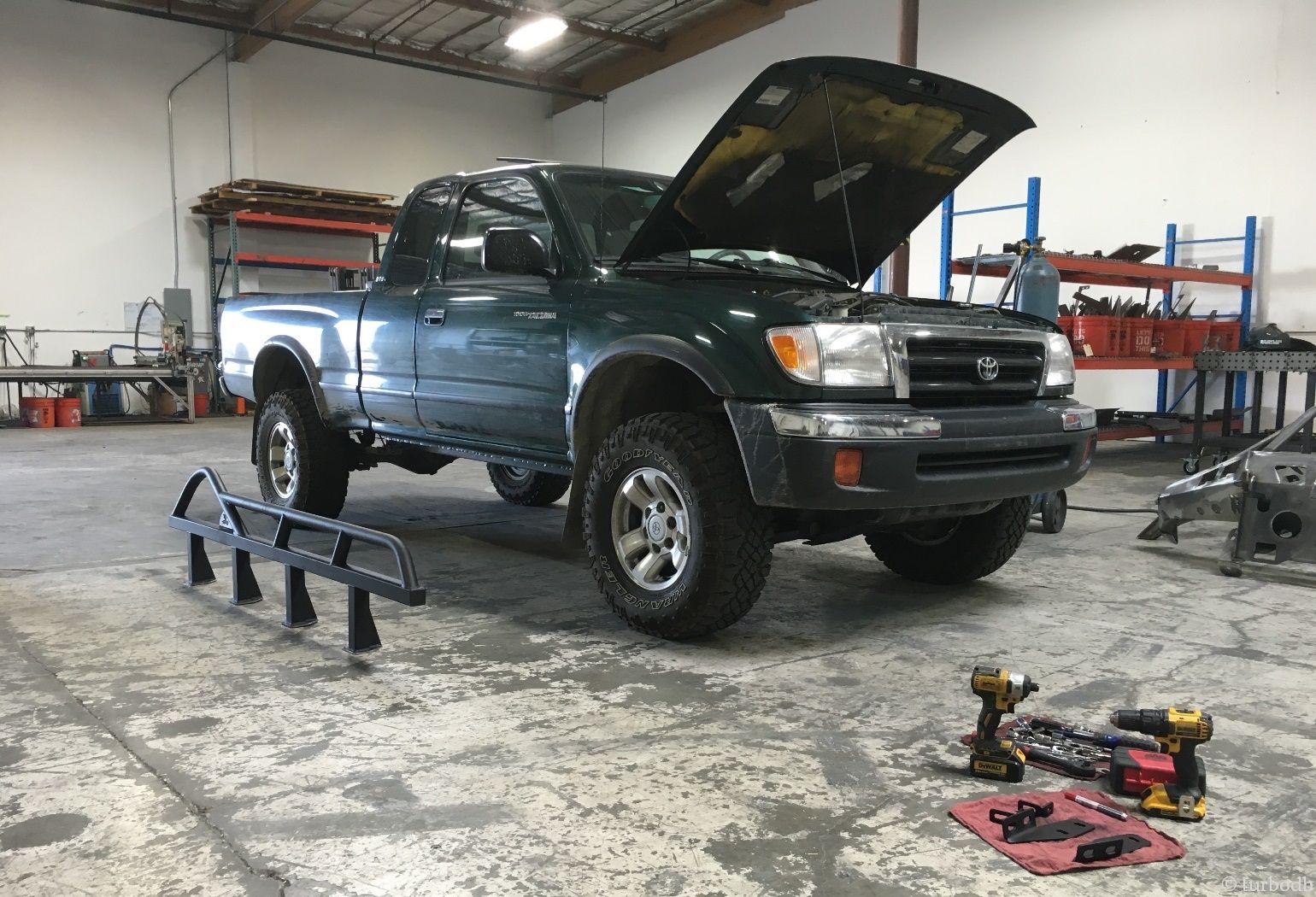 Through the intros and first few minutes I was wondering if Eric or Brittony would want me to stick around and take pictures but after about 10 minutes I realized that it's probably pretty normal for us Taco owners to stick close by our trucks as grinders, welders and hammers are taken too them. In fact, looking back on it now, I think there was an expectation that I was going to stick around - sweet.

From the beginning, Eric was super hands-on in the work. Laying out for the sliders, he called me over to ask if I wanted the body pinch weld notched in order to move the slider up another half-inch. He was great - talking through the pros and cons (I couldn't really think of any cons, and he didn't really have any either 🙂 and then taking the time to carefully mark and notch the pinch weld to move the sliders up for just a bit more clearance over obstacles. Sweet. 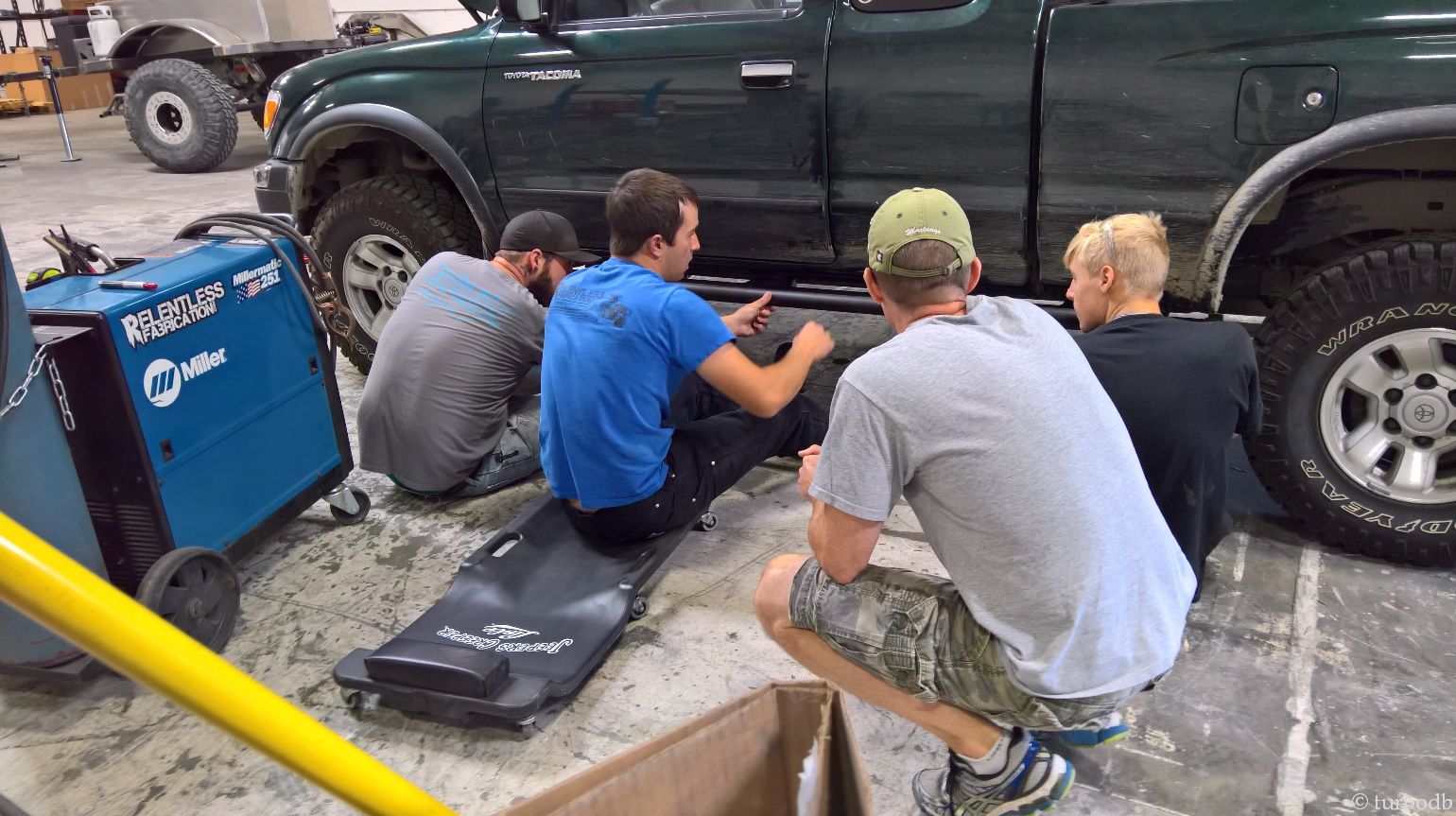 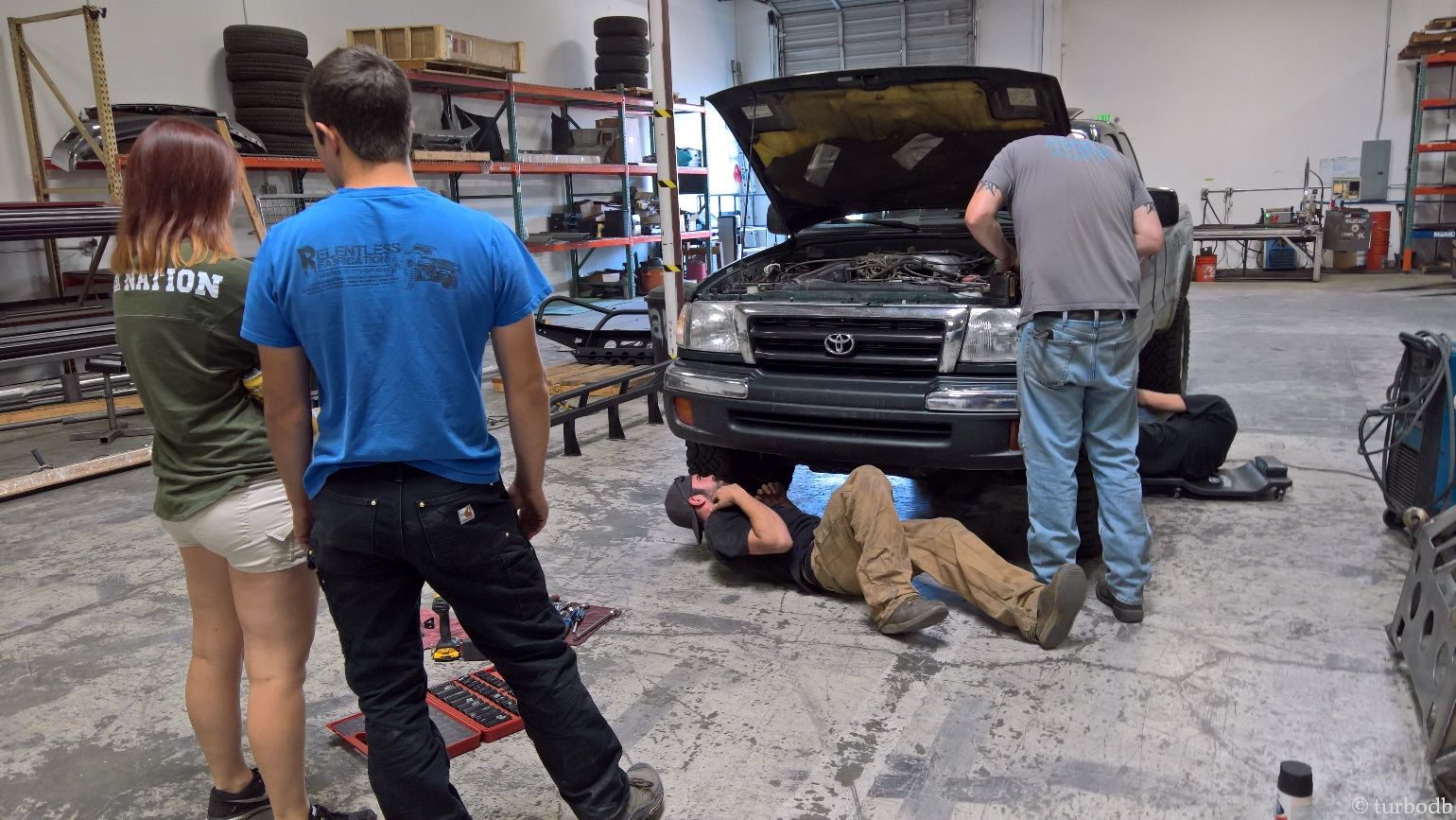 Brittony popped out throughout the day as well to keep tabs (and learn about!) what was going on - as we all know, Relentless is highly sought after (hence the long wait times) but from conversations I had with each of the guys and Brittony throughout the day, it sounds like most of it's mail order - there just aren't that many install days.

Now, my specific install situation was a bit unusual. Generally, I'd guess that if you buy a bumper from Relentless and you're going to install a winch, you'd buy the winch from them as well. As it turned out, I got a pretty amazing deal on my M8000-S, and Brittony came through again saying that they would install it as long as I had it wired up when I brought it in. So that's what I did, and in talking to Eric about where to put the solenoid, I mentioned that I would eventually mount the solenoid to the bumper using a bracket. As it turned out, he had Danilo build a bracket while the rest of the guys were installing armor, and I left the shop with the solenoid mounted (at no extra charge!) Wow.

"Slower is faster." - my favorite part of the day

As the prep for the bumper install proceeded, Eric kept a close eye, and at what became my favorite point of the day he came out of a quick break he'd taken to talk to Brittony in the office to find something not quite up to his standards. Totally respectfully, but also firmly he pulled the team together and said "Go slower. You're rushing. Slower is faster." As a craftsman (woodworking, not metal) and perfectionist myself – that was music to my ears. And it was great to see him get hands on again, taking measurements, marking exactly where he wanted a few additional cuts made, and then handing the reigns back to the guys - again, showing his confidence in them as well. 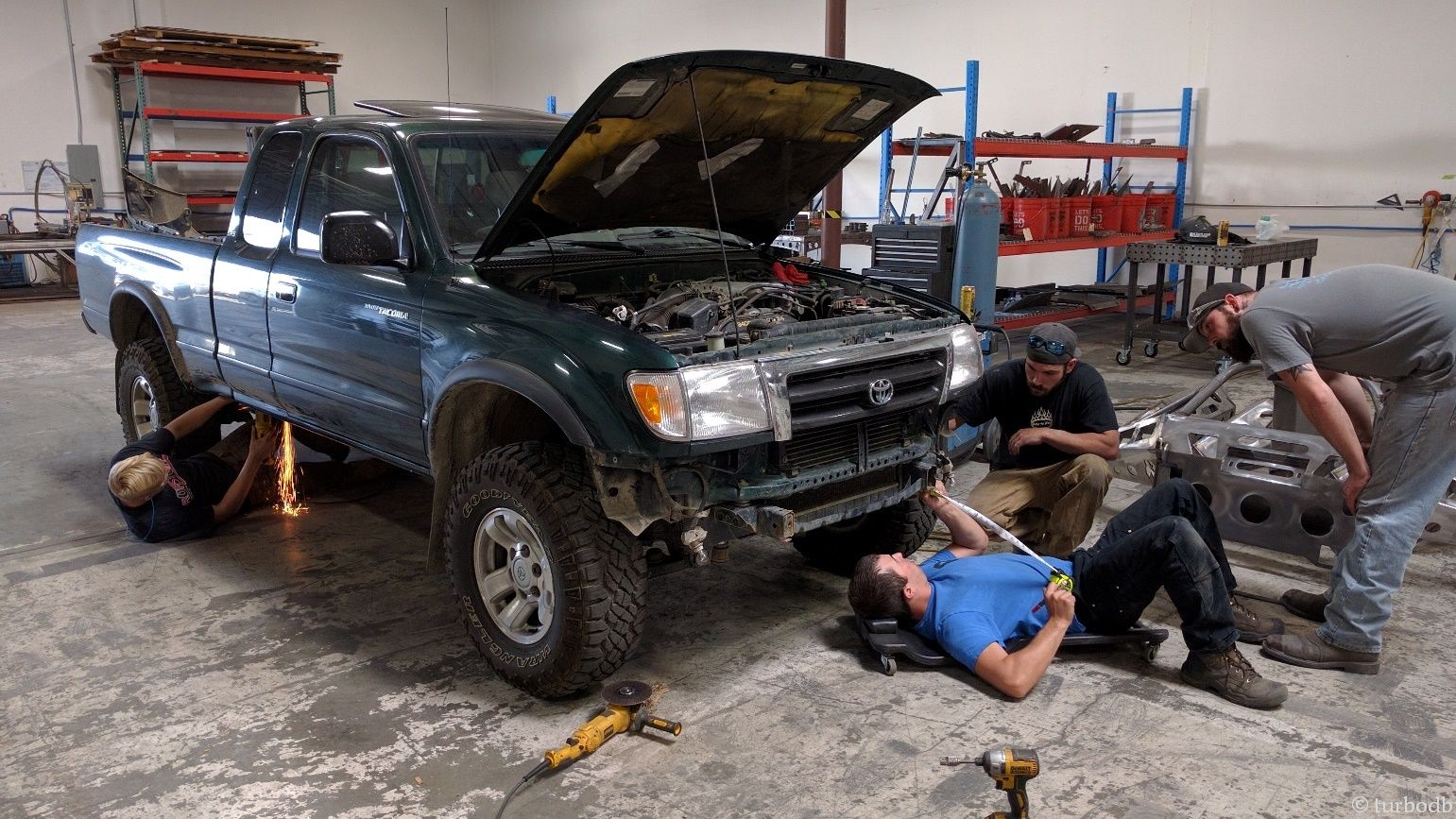 From there, work proceeded pretty much without a hitch. All the preparation was completed quickly and efficiently with Weston grinding the frame to prep for the sliders, Tyler prepping the front of the frame for the bumper, and Chad helping to get the winch installed in the bumper for install. As each step progressed, Eric would come in to do the welding (these are beautiful welds) - welding on the sliders and frame end caps that would hold the bumper in place. 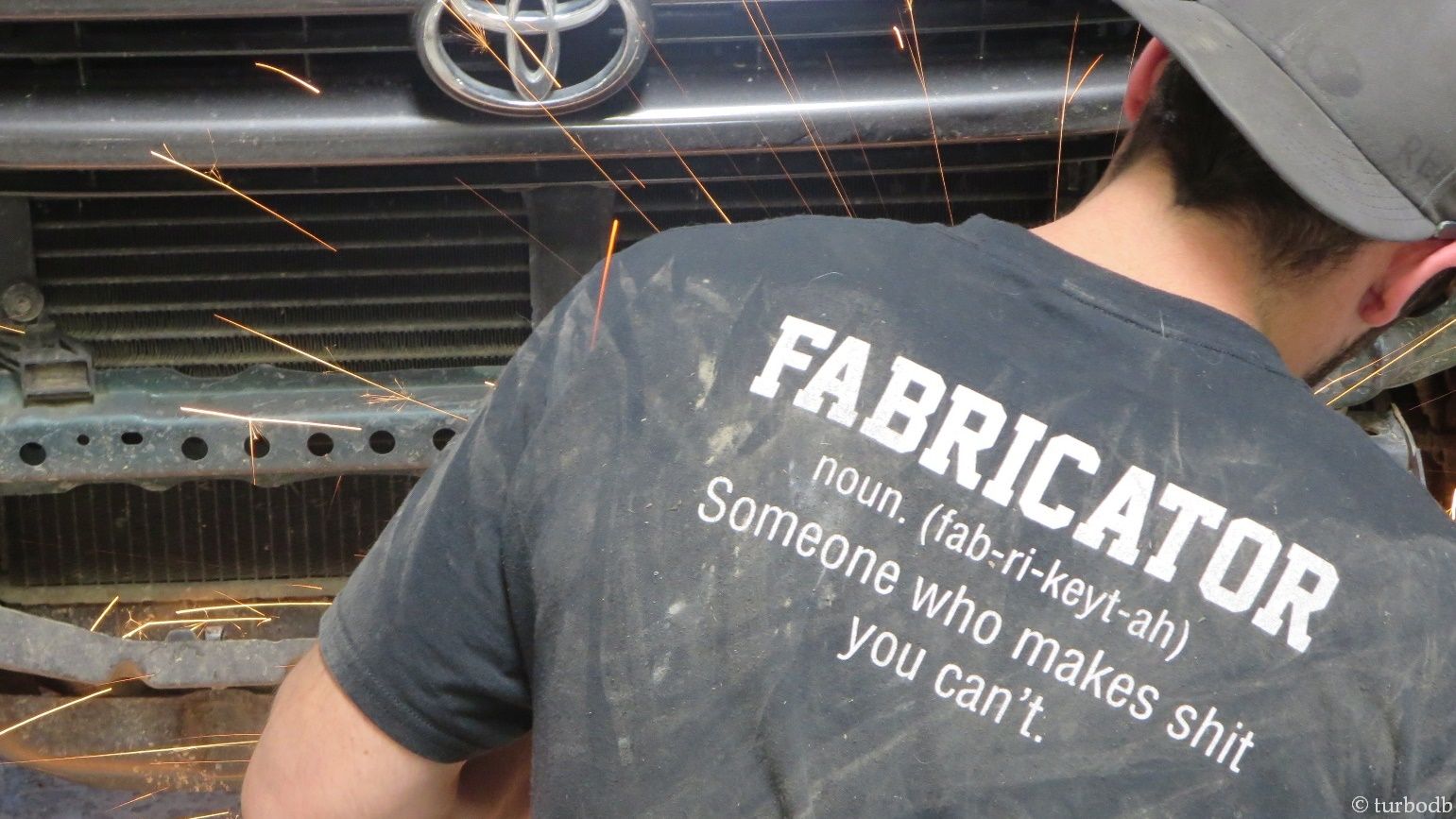 In no time at all, the bumper was ready to be installed. As I looked at the time, I noticed it was still before noon - amazing, when we'd planned that just the bumper would take us to mid-afternoon, and the guys had already installed the sliders! Well, there was a bit of a hiccup with the bumper install - a minor frame alignment issue (that took about 15 minutes of grinding by Tyler to remedy) but that was quickly resolved and the guys moved on to connecting the winch to the battery, installing the solenoid bracket right where I wanted it, and getting the winch spooled up - using the Relentless Runner as an anchor point - all while clearly having a great time. 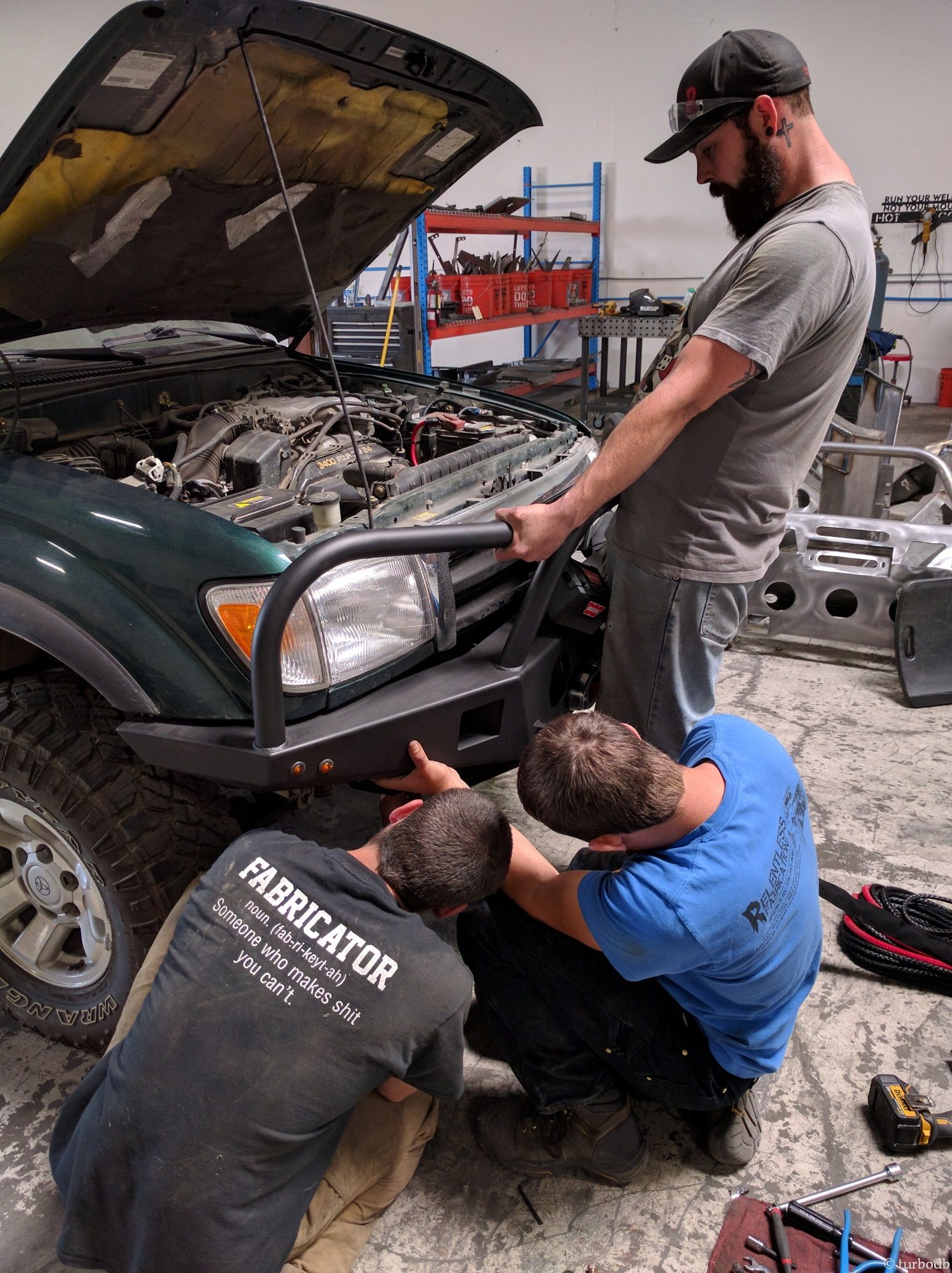 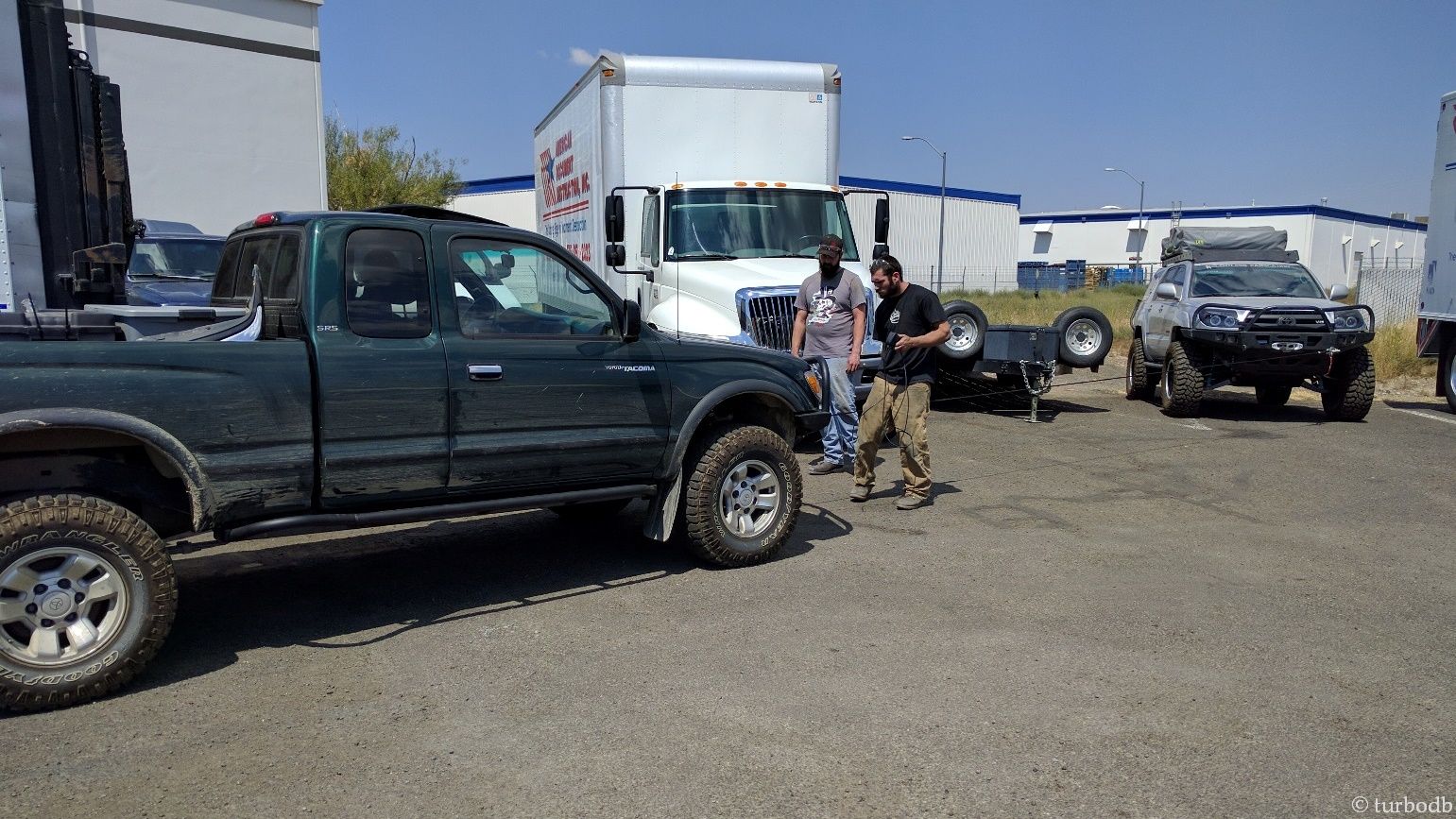 By 12:15 or so, it was done. I had the bumper, winch, and sliders I wanted and half a set of skids in the bed. Yeah, half a set - because Eric took a look under the truck and realized that the t-case (mid) skid wasn't going to fit. Being a California Tacoma, mine apparently has an extra Cat which means the skid needs to be 10 inches longer than normal. A true pro, Eric didn't hesitate to tell me about the issue, and offered to send the skid up to me in Seattle once he was able to fab one up a few days later. Top notch. 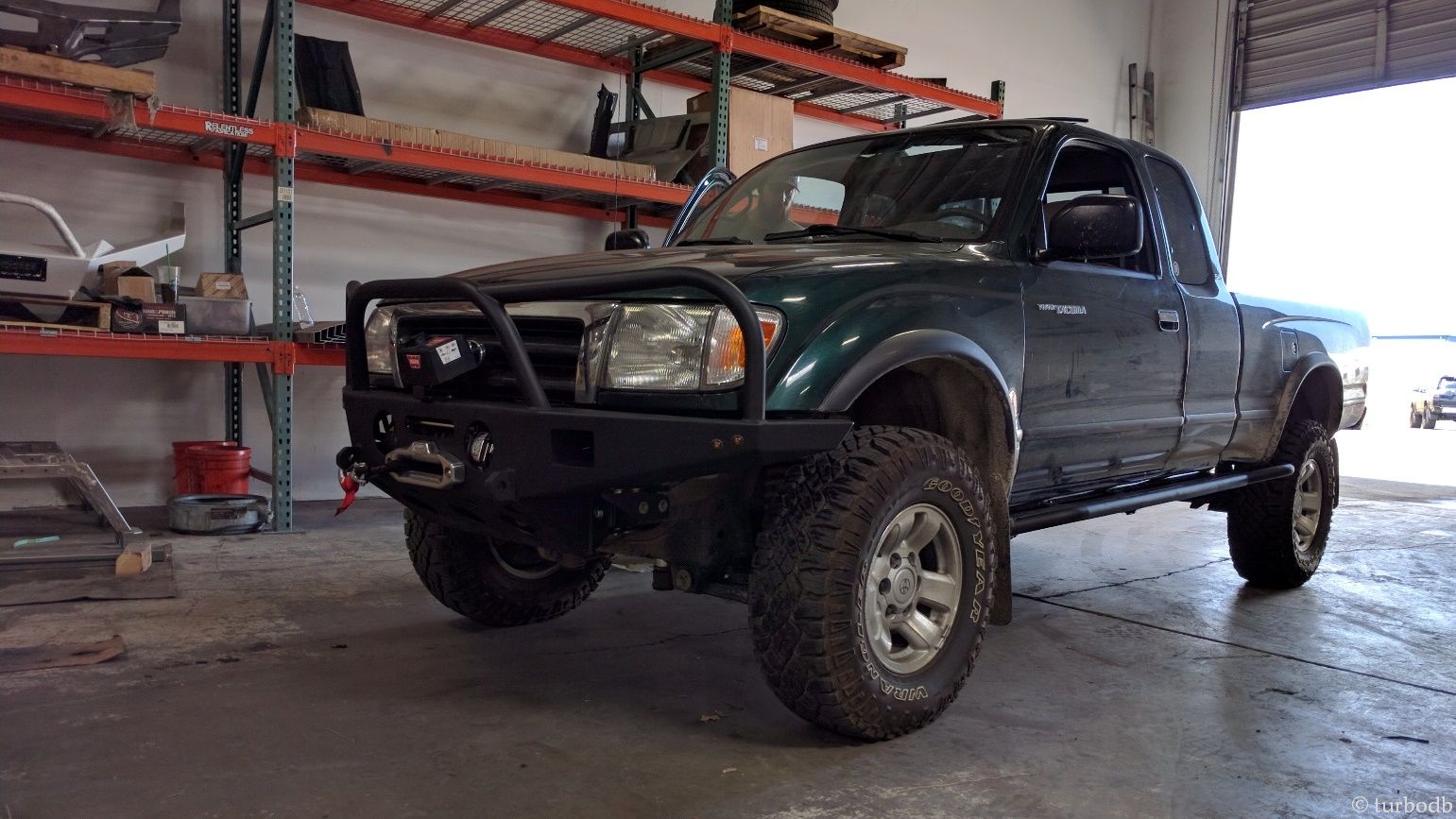 So, what can I say, but thanks? Eric, Brittony, Danilo, Tyler, Chad and Weston - you were all awesome. The workmanship in the shop was great, the email communication was always quick, and I'm thrilled with the results. I've already got my front skid painted and ready to install, and I hear from Brittony that my mid-skid should be here in just a few days. 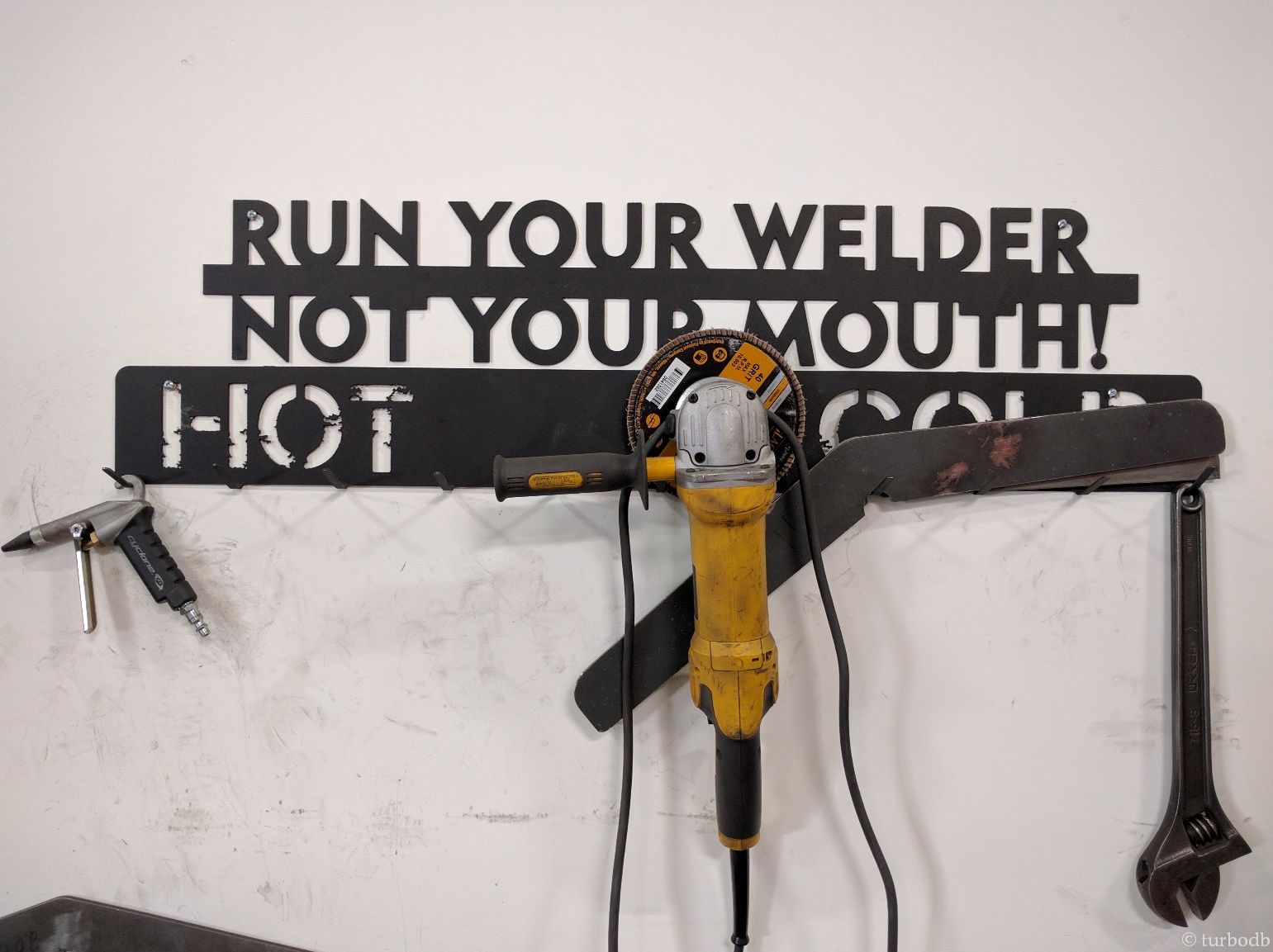