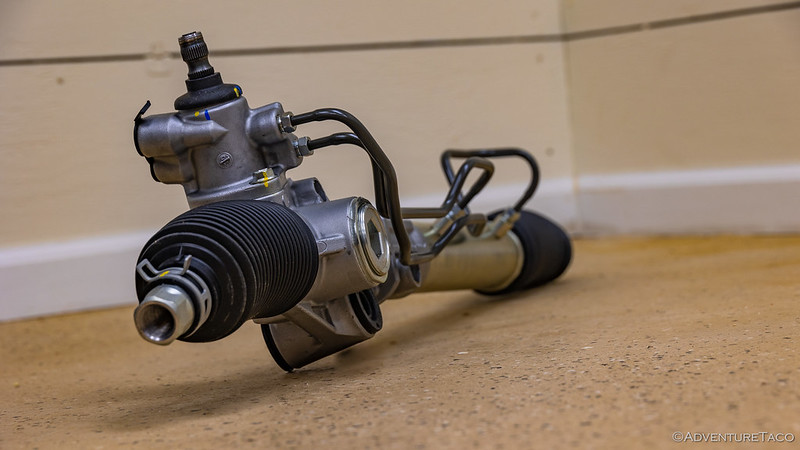 It's been a while since the last Rig Review. Since then, I've put five trips and 20K more miles on the Tacoma. It has - as always seems to be the case - been fantastic.

Let's do a quick rundown of things that are working well, and places that need a little TLC after the last bunch of miles.

TL;DR - After 21 years, my seats are worn out and I need to get new ones or refurbish the ones I've got.

It was somewhere in the middle of these trips that I really started to feel my seat being worn out. Until then, I'd felt like the Tacoma seats were pretty good - especially with the Wet Okole covers, and definitely better than the seats we had in the 4Runner (which had 270K miles). Over time though, the foam in the driver seat has worn out, and while it is still in fantastically good shape - compared to other 21-year-old seats - I've felt myself sinking into them more and more, and my back sometimes hurts after 18+ hour drives.

My initial shot at fixing things up was to buy a set of Corbeau Baja XRS seats, but I didn't find those as comfortable as others have. With a seat, comfort is king, so I've returned them and swapped seat bottoms between the driver and passenger side for the time being. 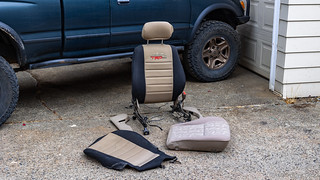 Swapping seat bottoms isn't hard, and can eek a little more life out of existing seats at no cost.

I think my next attempt at comfort is going to be a Scheel-Man seat. Pricey, but if you're going to splurge somewhere, this seems like the right place.

TL;DR - The stainless steel bushings seem to be doing a bit better, but I'm not ready to say that they are the right way to go. Yet.

So far, I have just over 16K miles on the FKSSX10T-F1 spherical bearings. The passenger side is still "OK," driver side is "OK+" or "Good-". While they definitely not as tight as new - when a bolt/lever is needed to move the sphere, they certainly aren't loose either - there is no space between the ball and retainer. I can move the ball by hand, relatively easily, and more easily on the passenger side than the driver side. So, these SS bearings are certainly lasting longer than the COM10Ts I was running previously (where I was getting a jiggly joint at 7-10K miles), but I don't know if they would be better than the hardened steel versions.

Oh, and here's my rating scale: 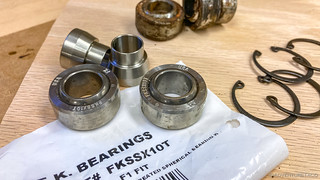 I definitely recommend genuine FKS bearings at -F1 tightness; not sure about the stainless steel variant yet.

TL;DR - All the new bushings I installed recently seem to be doing great.

It was a bunch of work, but replacing the LCA bushings, front diff bushings, steering rack bushings, and front bump stops (see Replacing All the Bushings) was definitely worth it. My alignment with the new LCA bushings was much easier, and the front bumps are a lot smoother when I get into them. 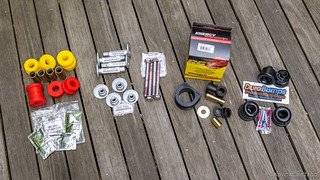 All the bushings I replaced.

The one issue - that may be related - is that my steering rack is now leaking. I don't know if this is just a coincidence - timing wise - or if moving the rack around to replace the LCA and rack bushings caused the leak, but it's another thing to add to the list of maintenance items.

Oh, and I thought that replacing the LCA bushings might fix the squeaks in my suspension. It didn't, so I need to address those as well (see below)

TL;DR - My Hella's are working less and less now; I'm biding my time until the end of the year, when I hear that Diode Dynamics may have something fun coming.

I originally thought that my HIDs in the 7" Hella 700s were not turning on because there was a problem with the ballasts. I contacted DDM Tuning to initiate a lifetime warranty repair (which they were going to honor, though I'd have to pay shipping), but then decided I ought to try a different relay before sending in the ballasts. The relay seemed to fix the issue for a short amount of time, but then they stopped turning on again. While the issue may be the ballasts, I am not as much of a fan of the setup as I was initially - the ballasts add a lot of RFI to the electrical system, and the light pattern of the HIDs isn't great.

As such, for now, I'm going to start looking at replacement lights. I hear Diode Dynamics may have something coming out around the end of the year that I could find extremely interesting. 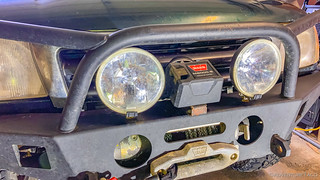 I'm not as happy with the HIDs in the Hellas as I was when I initially installed them.

My Steering Rack is Leaking (new)

I don't know if it was related to the work that I did on the steering rack bushings or LCA bushings (where the steering rack has to be moved pretty far in order to access the rear cam bolt), but shortly after Replacing All the Bushings, the steering rack started to leak. So far, it's a very slow leak and carrying a quart of ATF to refill the power steering fluid reservoir - about a rate of about 1 oz. per week - has been fine, but I've already ordered a new steering rack to replace the old one. It has, after all, served me well for 21 years and 190K miles. 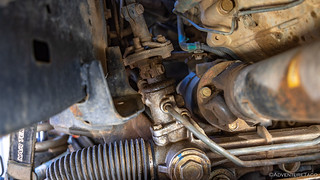 The dreaded leak. Perhaps I'll rebuild it once the new rack is installed. 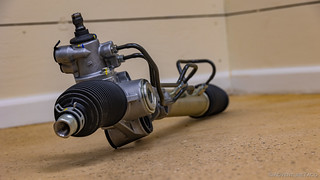 Just waiting to be installed.

After replacing the LCA bushings, I thought a bunch of the squeaking that I have as the truck bounces over rough terrain might be fixed. It wasn't. There are two more sets of bushings that I'm sure could use a bit of attention - grease, at least, if not replacement - those in the SPC upper control arms (UCAs), and the Alcan rear leaf springs. Both are polyurethane - so prone to squeaks - and I'll be adding grease zerks to them when I replace them. I'm in no real rush though, since the squeaking doesn't bother me all that much, especially after sound deadening the cab. 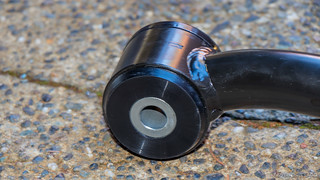 TL;DR - I've traded in my low camp chair for a normal-height one. I'm liking it so far.

After many years of enjoyment from my low camp chair - and it really is comfy to sit in - I've decided to try a new chair that's "normal height." The impetus is really to get a chair that sits more upright, so that I can eat dinner in it more comfortably, and so that around a camp fire, more than just my feet can get the radiated heat. That said, I don't want to have something that's uncomfortable, and I do really like the reclining nature of my low camp chair, so for now I'm trying out the GCI Outdoor Freestyle Rocking Camp Chair. 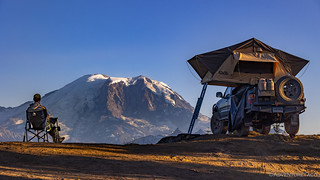 My first experience with the new chair was blissful.

A Small Mod to My Ham Radio Antenna (ongoing, resolved)

TL;DR - The NMO mount on my Ham Antenna was just a little too deep, and the antenna would contact the roof when it was tightened down, leading to rust. I've fixed that with a bit of judicious grinding.

I've really liked the Diamond NR770HBNMO Mobile Antenna and NMO mount that I have installed in the roof of the Tacoma for the Kenwood D710G dual-band ham radio. The antenna tunes up nicely, and I constantly get good reception. Having solved my problem of hitting trees (see Winter 2021 Rig Review), the final thing I needed to fix with the Diamond was to reduce the depth of the threaded connection slightly so that it doesn't contact the roof when installed. This isn't something that is constant, but it appears to contact the roof intermittently when the antenna hits a branch, and there's a bit of rust on the roof. 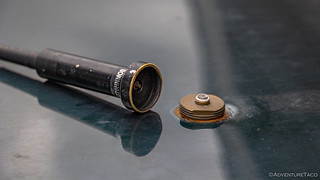 A few seconds with the grinder, and I've reduced the threaded section by 1/8" or so. Problem solved!

TL;DR - An appropriately sized (slightly thicker) spacer between the opener and the roof of the Tacoma makes the opener work quite a bit better!

Fixing the garage door opener that I installed in the headliner couldn't have been easier. It turns out that there was about ½" of space between the top of the Homelink opener and the metal roof, so I simply taped a piece of plywood to the top of the opener and shoved it back in place. Now, the cover is easier to attach, and pushing on the buttons doesn't put any strain on the clips that hold the cover to the opener, since the pressure simply transfers to the roof. This really is a great mod, and one that I highly recommend. 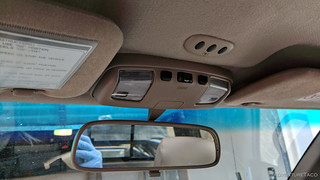 If you have a garage, this is a great way to get in, conveniently.