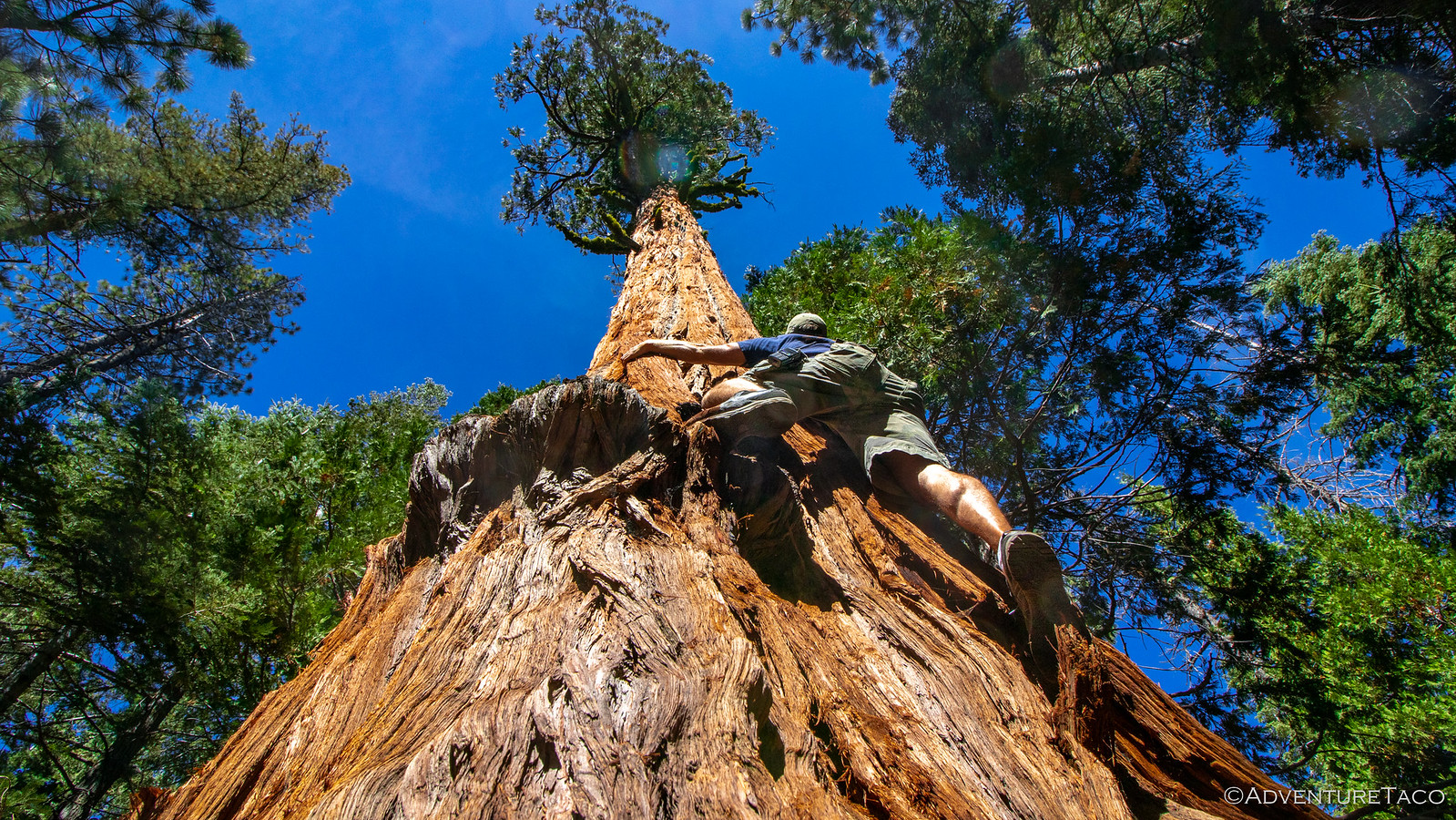 Part of the Into the Sierra Wilderness (Sep 2019) trip.

Well, it's not every day that I get to go camping with my dad, and it's not that often that I camp in the same spot for more than one night. I mean, I guess we camped in the same spot two nights in a row on the Idaho BDR when a brake caliper seized up, but that was clearly an exceptional situation!

Plus, after last year's adventure - my first time experiencing one of Pops favorite spots in the Sierras - I knew this was a place that I wanted to return. Likely, for years to come. It really is a special place.

So, early in the summer, we arranged a week where we could get together and just go enjoy the outdoors. I forget exactly when that was going to be, but as seems to happen in life, life got in the way and we had to cancel. It was a bummer to say the least, so it was awesome that a few months later we were each able to squeak several days into our schedule to pop down to ▮▮▮▮▮▮▮▮▮▮▮▮▮  for a few days.

Anticipation high, I headed south - a 14+ hour drive to the Bay Area - on the 11th of September, flags along the route at half-mast, and the skies above blue as could be as I entered California near Mt. Shasta. 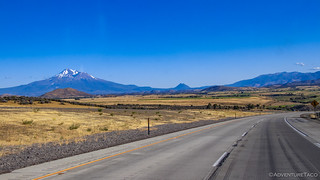 It was nearly 11:00pm when I arrived in the Bay Area, ready for a good night sleep before setting out for the Sierra Wilderness the next morning. Due to some mechanical issues with Pop's Limo Jeep (randomly not starting when it was warm), we didn't actually leave until 10:30am or so, everything packed up into our two trucks as we cruised across the San Rafael bridge on our way east. 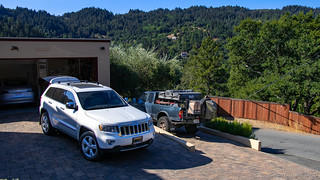 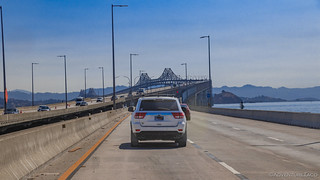 From the Bay Area, we had a good five hours or so of driving. A little chatter on the ham radio and a stop for lunch at my favorite restaurant - La Morenita in Turlock, CA - kept us in good spirits as we made our way east. By late afternoon, after travelling some 30 miles down ▮▮▮▮▮▮▮▮▮▮  we'd arrived at our final turn. Unsure what we'd find since the snow had been do deep and winter so long, we pulled over to capture the moment. 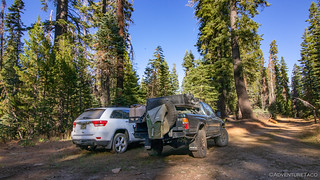 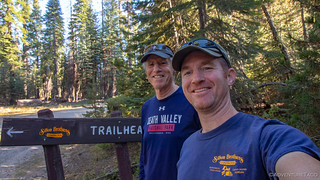 With that, we set out toward the camp site, and it was immediately clear that winter had taken its toll on the road. Luckily for us, most of the trees had been cleared, and those that weren't had been bypassed by explorers before us, allowing us to make it all the way to camp without the need to cut anything out of the way. 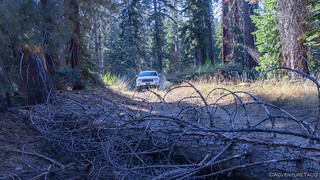 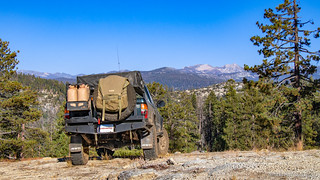 Despite the fact that folks had been down the road before us, it was reasonably obvious that no one had made it as far as our final destination - the road to the semi-hidden camp site, very faint indeed. This was reinforced by our discovery of a 24" tree that had fallen directly into camp - a tree that Pops had been worried about for years, and was glad to see on the ground despite the work that would be entailed cleaning it up over the next couple days! 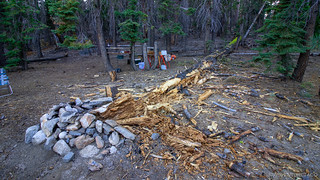 And with that, we set about our relaxation. I moved my truck into position overlooking the gorge of the creek, and Pops setup camp in the back of his Jeep. And then we enjoyed the late summer breeze as it blew through camp. 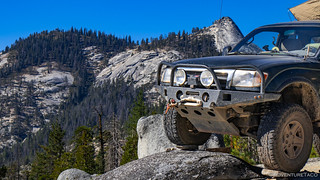 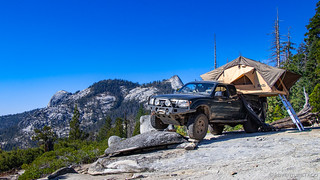 One of the great things about heading to a beautiful spot to camp for a few days is that there's no rush to see everything and then move on to the next viewpoint - it's quite different than my normal mode of exploration, and allows for a deeper, more relaxed, soaking in of the surroundings. Over the next 48 hours, we each did our thing - lots of lazing around camp and chatting, of course - but also exploring the hillsides around us.

An avid birder, it was not uncommon to see binoculars or a scope raised to eye level at any time during the day. Were there any "never before seen birds" on this trip? I have no idea, because they're all just Chirpus Aroundus to me! 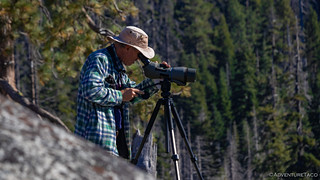 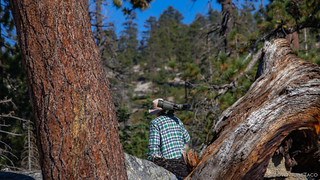 Our active sitting around in camp also allowed us to enjoy the changing light of day. Looking out towards the valley, ▮▮▮▮▮▮▮▮▮▮▮▮ , and Little Bear Hill, we enjoyed sunrise, mid-day, evening, and sunset each day we were there. Oh, and it didn't hurt - at least in my opinion - to have a 1st gen Tacoma in the foreground. 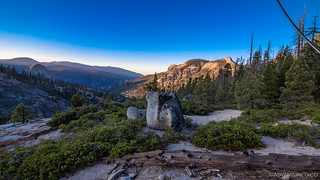 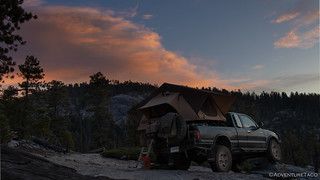 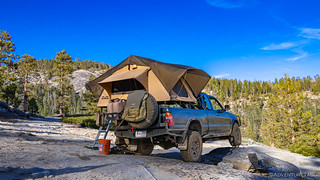 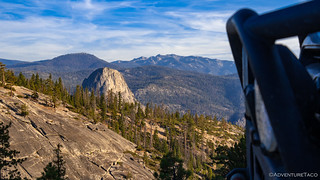 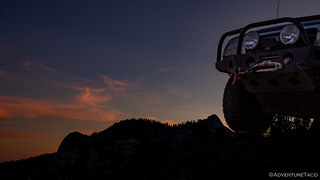 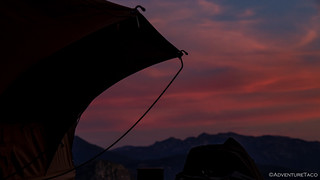 Newer to and less familiar with the area than Pops, I also took the time to explore the hill directly behind camp one morning - or afternoon - while he was out searching for the ever elusive Flyus Quietlybyus. It was a pleasant couple-mile hike up and over the crest towards Little Bear Hill, a few interesting tidbits worth capturing along the way... 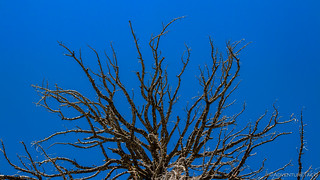 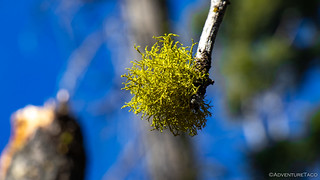 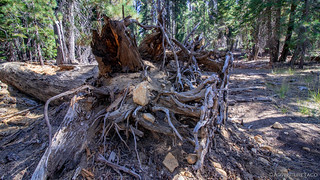 This old beast, it's flat-bottomed root system hampered by the granite it encountered, and not strong enough to keep it standing. 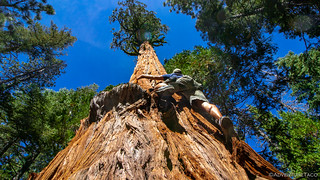 Who wouldn't want to climb this amazing specimen? 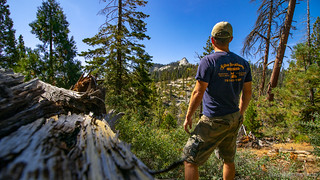 Nearly there - Little Bear Hill much closer than it is from camp. 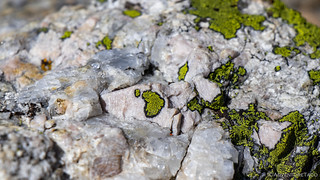 More lichen on the quartz, the area a generally dry one when it's not covered in snow. 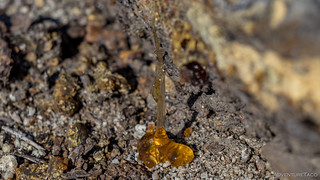 Golden sap, dripping from a compromised root, gleaming in the afternoon sun.

Well - needless to say - the whole thing was just torturous for the both of us. After a late lunch, it was all we could do to plop ourselves down in our camp chairs and occasionally move them into a new shady location as we chatted away the afternoon and early evening. Eventually of course - as the sun set to our west - we realized that it was once again time to eat - Americanized tacos on tap for the evening. 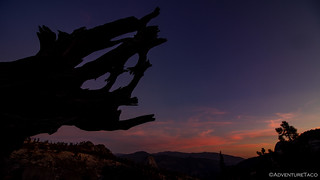 These are assembled with flour tortillas (so yes, more of a burrito), cheddar cheese, ground beef with taco seasoning, plenty of guacamole, and fresh lettuce. Optionally, some Tapatio - or your favorite - hot sauce make them even more delicious! They're great camping, since - with the exception of guacamole - everything can be prepped beforehand, and there's a single pan to clean at the end of the whole shebang.

After dinner of course, it was time for the requisite camp fire and more conversation. We'd spent 36 hours or so in camp by this point, and we had a similar 36 hours to go. Perhaps tomorrow we'd venture out and away from camp - a hike up to Lost Knife Knoll, or along the ▮▮▮▮▮▮▮▮▮▮▮▮▮  to an overlook of the ▮▮▮▮▮▮▮▮▮▮▮  Valley.

Whatever it was, we knew it'd be both relaxing and beautiful - and that was enough for us! 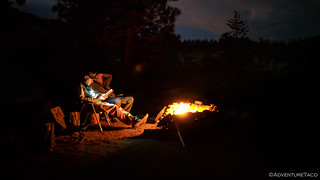 Not technically from this trip, where we missed John's presence from last year's outing.

More of This Special Place

We've Arrived in Paradise | Escape to the Sierras #1

Bridge-to-Bridge in the Middle of Nowhere

Slowing Down in the Sierra